“America will never be destroyed from the outside…” Abraham Lincoln

“Germany’s past is a fractured past — with responsibility for the murdering of millions and the suffering of millions. That breaks our hearts to this day. And that is why I say that this country can only be loved with a broken heart.”    Angela Merkel

“The sun puts a veil in front of the universe, and nighttime removes it -- we get to see beyond.”   Sabra Field, Printmaker

This is a story of listening beneath our expectations.

After the Middle Ages, Western music began to mold itself into a more clear-cut tonal organization. The Western world was collecting into cities/states/countries, containing within borders, defining inclusion and exclusion. Thus, it is no surprise that, as a reflection of its culture, music was doing the same. What started out as tonal Modes in ancient Greek civilization slowly evolved into major and minor scales or keys, with a set order of tonal relationships – a specific ordering of half and whole-step intervals of sound. Where once a bard could sing his story without rigidly defined borders, there was now a firm inside and outside. Anyone "violating" the established scale was charting new territory, speaking a new dialect, changing the color of the landscape. And only a few did. The next 300 plus years of Western music unfolded from these established expectations.

In the middle of the Covid Pandemic, in the middle of the Black Lives Matter protests, one lone clarinetist made a small, quiet video that touched at the core of the symbolic nature of music, and at the core of America’s unmet expectations. He did this by changing only two notes and omitting a third, in his offering of “America the Beautiful.”  Please watch and listen:

He needed only one stanza:

O beautiful for spacious skies
For amber waves of grain,
For purple mountain majesties
Above the fruited plain!
America! America!
God shed His grace on thee,
And Crown thy good with brotherhood
From sea to shining sea!

When he reaches “America,” he lowers the anticipated “E” to E-flat, a mere half-step lower. That simple change transforms “America The Beautiful” from the key of C major, to C minor. What we have always experienced as an uplifting anthem to the beauty and expansiveness of the land, becomes something dark, closed in, ominous. In order to remain in this minor key, when he gets to “grace” he again needs to lower by a half-step the “A” that we were expecting, to A-flat. Curiously, the words America and grace are the moments of the turn – from major to minor, from light to dark, from open to closed, from outward to inward.

As he arrives at the end, “From sea to shining sea” he confounds our expectations one final time. Instead of arriving squarely at home, on “C” on the word “sea,” he leaves us suspended at the end of “shining” with no resolution, no grounding; instead, trailing off into the air, incomplete.

Tucked into these two ‘wrong’ notes lies not only the history of Western music, but the history of America as well. With this new music, we are compelled to look into the dark. The amber waves of grain, the fruited plains, no longer glinting in the sun’s light. Now a shadow clouds their brilliance. It is the shadow of America’s attitude towards the dark, from its inception. The brown skin of the Native Americans, and the black skin of African slaves, did not fit into the major scale the European settlers were accustomed to.

As with every symbol, darkness is many-sided. Our E-flat leads us into the multivalence. ‘Dark’ seems to be the word of the hour. Yet it is most often used to infer the negative of ‘light’. As Jungian analysts we often speak of bringing something ‘up’ out of the unconscious/ out of the dark, into the light. Perhaps that language doesn’t always serve. There is much to be learned and gained and felt from staying in the dark until our eyes are acclimated so that we can actually see in the dark. Think of the beauty we would miss if we didn’t see the night sky, or hear an owl, or a Chopin nocturne, or wrap ourselves in a deep rich maroon shawl as the season turns. Indeed, where would we be as humans without seeing our history painted on the walls of the Lascaux Cave?

It may seem that we have strayed far from Mr. McGill’s E-flat. But not really. He brings us face to face with our unconscious expectations. We expect to live our lives in the light, in the white. We expect to be uplifted and self-congratulatory upon hearing one of our patriotic songs. We even expect to keep the shadow from bothering us, under wraps, out of the light. Shadow is merely a suggestion of the dark. The E-flat unleashes what is beneath -- all the sadness and dark beauty that is memorized not in the open fruited plains, but in the dense forests, in Native American burial grounds, in the sound of Nina Simone’s voice singing “Sinner Man.”

There is a deep scar that runs the length and breadth of America, way beneath the wild-fires’ scorched earth, from sea to shining sea. It is the scar of the American soul. The pain of that wound is excruciating. We are terrified, terrified of feeling. Were we to feel we would have to carry all the sadness more consciously. We prefer the unfeeling scar tissue that forms over the wound. We can remain protected, defended. But there is a trade-off -- we then also don’t feel the excruciating beauty of the purple mountains, or of a Schubert sonata, or the stars in the azure vault of the night sky.

Our work is unfinished. We are never fully “home.” 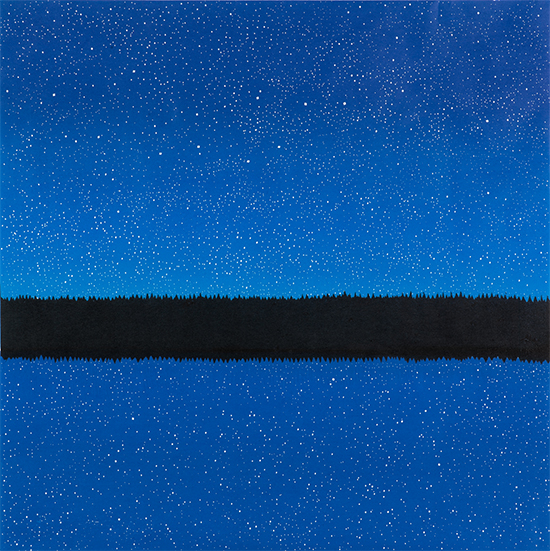 Illustration: “Island in a Sea of Stars,” woodcut by printmaker Sabra Field

Melinda Haas started her formal musical life at age three in New York City. Her music education encouraged improvisation as well as classical training. Her first career as Modern Dance Accompanist was an extension of that background. After many years playing for the Martha Graham and José Limón Companies, among others, she turned to Psychotherapy and Psychoanalysis, becoming first a Clinical Social Worker and then a Jungian Analyst. She has been in Private Practice in Manhattan, and more recently also in Vermont, for many years. In addition to her analytic practice she teaches and supervises in New York and Vermont. She has presented papers on music and Jung at the International Association of Analytical Psychology Congresses in Barcelona, Montreal, and most recently in Vienna, at Art and Psyche conferences, and a pre-concert lecture for the LA Philharmonic.  Her essays are published in Music and Psyche: Contemporary Psychoanalytic Explorations, (eds. Ashton and Bloch). She is past President, and still actively involved in the Archive for Research in Archetypal Symbolism, ARAS.