Archetypal Defenses of the Group Spirit in Russia and Ukraine: The Axes of Destruction 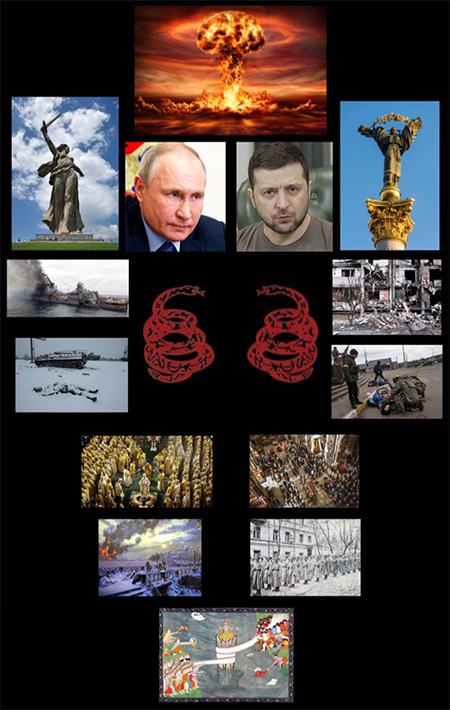 When confronted with the horrors of war in Ukraine or Syria or Iraq or Vietnam, we try to figure out what is happening and why it is happening. We piece together the bits and pieces of stories and images that come to us from many different sources in order to create for ourselves a coherent narrative, knowing that at best we can only get a fragmentary glimpse of partial truths. Our abilities to explain are as limited as our comprehension of the seemingly endless and massive capacity of human beings to inflict pain, suffering, and death on one another. After considering all the studied explanations that contribute to the outbreak and conduct of war, we are still left with the sense that some inexorable process has been triggered and that once the conflict is ignited, it becomes increasingly difficult to halt it until it has run its course, almost like a fever. Jung noted this when he wrote in his 1936 essay, Wotan:

Archetypes are like riverbeds which dry up when the water deserts them, but which it can find again at any time. An archetype is like an old watercourse along which the water of life has flowed for centuries, digging a deep channel for itself. The longer it has flowed in this channel the more likely it is that sooner or later the water will return to its old bed. The life of the individual as a member of society and particularly as part of the State may be regulated like a canal, but the life of nations is a great rushing river which is utterly beyond human control . . . Thus the life of nations rolls on unchecked, without guidance, unconscious of where it is going, like a rock crashing down the side of a hill, until it is stopped by an obstacle stronger than itself. Political events move from one impasse to the next, like a torrent caught in gullies, creeks and marshes. All human control comes to an end when the individual is caught up in a mass movement. Then the archetypes begin to function, as happens also in the lives of individuals when they are confronted with situations that cannot be dealt with in any of the familiar ways. (C.G. Jung, “Wotan,” Civilization in Transition, Collected Works, Vol. 10. Princeton, NJ, Princeton University Press, p. 189)

The focus of the two collages I am presenting here does not concern itself so much with the specific causes of the war in Ukraine, although specificity about who is responsible for what is always of great value when trying to understand such fundamentally incomprehensible events. Economic, geopolitical, sociological, psychological, and historical factors are all relevant and contributory. The stated causes for the war can be real, imagined, or manufactured or all three—it doesn’t seem to matter much once war breaks out. In presenting these collages my goal is to picture what happens when a war gets started for whatever reason. At the core of this process, I imagine a basic dynamic in which the fundamental unifying vision or spirit of a country, often latent in the collective psyche, is touched and threatened. In the name of this unifying and threatened spirit, impersonal and potent defenses—sometimes hugely aggressive-- are activated. This process taps into enormous collective emotion along with the willingness to make huge sacrifices, dormant in a society until its core spirit is imperiled and rallied. The suffering, violence, and destruction endured by citizens and soldiers alike is justified by participating in a shared belief and a unifying vision of the nation or the world.

Click here to read Archetypal Defenses of the Group Spirit in Russia and Ukraine: The Axes of Destruction in its entirety.