An artistic embodiment of the transcendent function 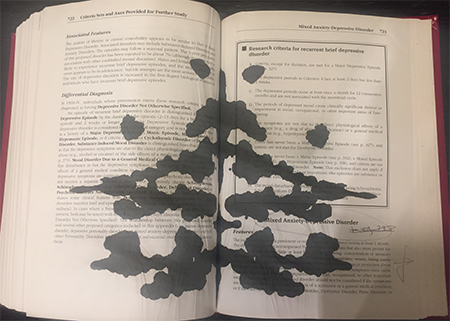 This paper is an affirmation of the art of psychotherapy through a piece of mixed media conceptual visual art. In our practice as Jungian analysts we commit ourselves to an art that is embodied in our careful consideration of the unconscious. Our work on ourselves and with our patients is a process by which we and our analysands try to bring together conscious and unconscious tendencies. This sounds simple, but in the current spirit of our times, the unconscious and the ego are both either deified or vilified. Most psychotherapeutic systems either deny or diminish the unconscious. At the same time, our culture is influenced by new age ideals, including some superficial misunderstandings of eastern philosophies which preach the death of the ego. A third way or a balance between conscious and unconscious, is rarely found in the culture at large or in the discourse of our patients. The objective of this paper is to capture this balance in an embodied experience and write about it, using Jungian theory.

The importance of a balance of unconscious and conscious forces cannot be overestimated. Jung dedicated much of his work to this issue, especially in the final years of his life which focused on the fundamental question of how opposites are to exist and meet each other. That is, of course, more complex than a simple balancing, but it is a larger version of the same theme. Even though opposites show up in many places, the complexio oppositorum of conscious and unconscious seems to be the fundamental issue for a human life that is embraced by the wholeness of psyche, the conjunction of them both.

The final chapters of Jung’s ‘autobiography’ Memories, Dreams, Reflections (MDR) contain important thoughts regarding the mediation of conscious and unconscious opposite. For example, the final sentences of the chapter entitled On life after death: ‘But man’s task is the exact opposite: to become conscious of the contents that press upward from the unconscious. Neither should he persist in his unconsciousness, nor remain identical with the unconscious elements of his being, thus evading his destiny, which is to create more and more consciousness. As far as we can discern, the sole purpose of human existence is to kindle a light in the darkness of mere being. It may even be assumed that just as the unconscious affects us, so the increase in our consciousness affects the unconscious.’ (p. 326)

Read An artistic embodiment of the transcendent function in its entirety here.