The Basel painting in the Jung Family Collection 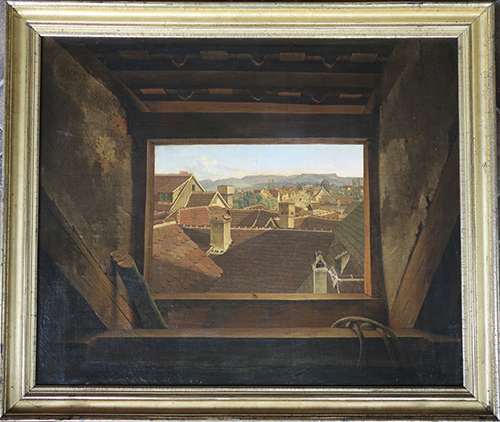 Dedicated to the memory of Lionel Gossman, author of Basel in the Age of Burckhardt, with thanks to the Foundation of the Works of C.G. Jung.

Perhaps the most significant recent development in the Jungian field has been a closer look at his development as an artist. This is in direct contradiction to his caveat that what he was producing was “nature” not “art.”  The publication of the Red Book meant that the entire corpus of its pictures were now available.  This was followed by The Art of C.G. Jung, which presented a range of what he had created in different media, the most eye-opening of which were his wooden sculptures.  But how was his nature nurtured?  What were the formative aesthetic experiences that shaped what he later called his daimon?  He reminisced about the parlor in his boyhood home, the parsonage near Basel, speaking of an “old painting in that room which now hangs in my son’s house: a landscape of Basel dating from the early nineteenth century.” (Memories, Dreams, Reflections, 16)

In illustrating Jung’s artistic development, I have previously featured the following painting by Carl Gustav Carus, (Figure 1) whom Jung refers to as a forerunner of a genre immensely popular with middle-class families throughout the German-speaking world.

Click here to read The Basel painting in the Jung Family Collection in its entirety.

Jay Sherry, PhD, has taught history and psychology at Long Island University (Brooklyn). His work has appeared in a variety of psychoanalytic venues. His Carl Gustav Jung, Avant-Garde Conservative received a Gradiva Award while The Jungian Strand in Transatlantic Modernism was released in 2018.