An excerpt from "The Snake and the Rope: A Jungian View of Hinduism"

In 1996, ARAS published a second volume of An Encyclopedia of Archetypal Symbolism on the theme of “The Body.” Its one hundred essays—one chapter per “body part”—were written by George R. Elder. More recently, Dr. Elder, a Jungian analyst, has written a volume on the history of Hinduism from a psychological perspective. It is entitled, The Snake and the Rope: A Jungian View of Hinduism. Here is an excerpt (slightly altered for this purpose) from chapter eleven where the many sides—and many images—of the Hindu God Shiva are explored.

Among all the extraordinary images of Shiva, the most famous is that of Nataraja, “King of Dancers.” 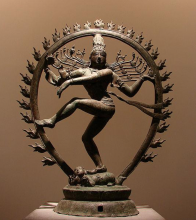 We see here an example from the Chola dynasty of South India (900-1300 CE) which patronized Shaivite religion and was responsible not only for great new temples with their stone sculptures but also for portable metal images like this bronze. It would have been carried in procession for darshan or “seeing” of the Sacred. It is also likely that a bit of tiger skin draped the image (deities are often ritually clothed for worship) while the God does wear a metallic snake around his shoulders. He stands on the yaksha dwarf Apasmara, the demi-god of “Forgetfulness,” whom we met at Gudimullam. Together, these elements allude to a myth of the God’s vanquishing the “three miseries” of maya (“illusion,” a tiger), karma (“transmigration,” the snake), and avidya (“ignorance,” symbolized by the dwarf). It was then that the Lord danced a dance of victory.

But we already watched him dance untamed lust in the Pine Forest; and in courtship he danced before Parvati on the mountain. At the junctures of the great cycles of existence, he is known to dance Destruction and Creation. In fact, the Lord himself declares in the Kurma Purana:  “I, the Yogin, dance on forever” (2.4.33). Shiva, therefore, is not only archetypal Pillar, Phallus, and Androgyne—he is also the archetypal Dancer.

Read An excerpt from "The Snake and the Rope: A Jungian View of Hinduism" in its entirety here.