The Flood: Using ARAS to Illuminate the Imagination 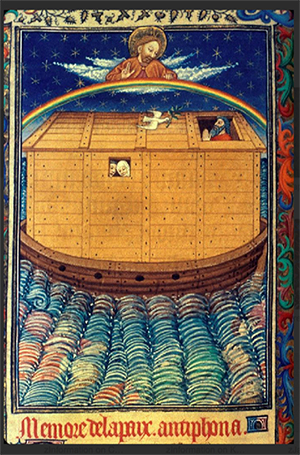 Table of Contents
Part One:  ARAS and the Illuminated Imagination
Part Two:  The Flood
Part Three:  The Ark and The Treasure

Part One:  ARAS and the Illuminated Imagination

In this essay I want to show how ARAS and its way of exploring symbolic imagery can be both a source and vehicle for the Illuminated Imagination.

ARAS itself originated in the urge to illuminate the imagination of the early circle of scholars from many different disciplines that gathered around Jung at ERANOS to probe the mysteries of myth and psyche.

Those of us drawn to ARAS seek to illuminate both our own imaginations and, hopefully, in the process, to learn more about how the creative imagination of all the different cultures of the world have contributed to and been enriched by symbolic imagery.

An ARAS inspired illuminated imagination of the flood is my theme in this paper and, of course, it centers around water—how it is contained in rivers, lakes and oceans and how it periodically overflows its natural and/or manmade boundaries in floods.

But, I am equally concerned with water as symbolic of energy or libido and the other kinds of “flooding” that we are facing in multiple ways in contemporary life. Jung wrote in his 1936 essay Wotan:

An archetype is like an old watercourse along which the water of life has flowed for centuries, digging a deep channel for itself. The longer it has flowed in this channel the more likely it is that sooner or later the water will return to its old bed. The life of the individual as a member of society and particularly as part of the State may be regulated like a canal, but the life of nations is a great rushing river which is utterly beyond human control... …. Political events move from one impasse to the next, like a torrent caught in gullies, creeks and marshes.

Read The Flood: Using ARAS to Illuminate the Imagination in its entirety here.

Thomas Singer, MD, a Jungian psychoanalyst, has been involved with ARAS since 1991.  He currently serves as President of the National ARAS Board and has been active in creating ARAS Online and editing ARAS Connections.