Illuminating Parallels in the Life and Art of Hilma af Klint and C.G. Jung 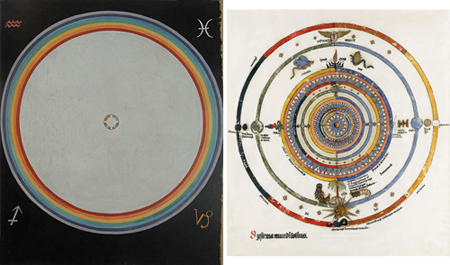 The focal point of this paper is the not yet explored parallels between the visual works and lives of Swedish artist Hilma af Klint (1862-1944) and C.G. Jung (1875-1961). They were contemporaries and sought answers to similar questions posed by the European and world-wide Zeitgeist, and were experimenters and innovators in their own rights. Both were interested in science and biology and are tied together by the spiritual, cultural and creative endeavors of their time that influenced their personal and lived projects and experiences. Neither of their works fit easily into any canon.

Hilma af Klint, called a pioneer, brings the unseen spiritual and immortality of man onto canvas through painting. Jung is a pioneer of the psyche who made the workings of the inner world visible. Both open windows so that the viewer can experience and see with different eyes. An exploration of their life and works gives insight from one innovator to another.

In this paper we give an idea of the work of the Swedish artist Hilma af Klint and put her work in parallel to C.G. Jung’s visual work that has become available through the publication “The Art of C.G. Jung” and the exhibition “The Illuminated Imagination: The Art of C. G. Jung” at the Art, Design & Architecture Museum University Santa Barbara which goes in parallel with the Art & Psyche Conference in Santa Barbara. 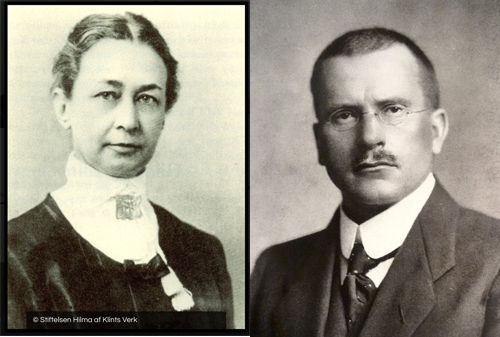 Jung and af Klint were near-contemporaries, born just 13 years apart. They shared 69 years together on this planet. Firm in her belief that the world was not ready for her work, in Notebook 'HaK 1049' she stipulated that works carrying the sign "+x" were not to be shown until 20 years after her death. When af Klint died in 1944, age 81, she bequeathed  her abstract painting and notebooks — more than 1,300 paintings and 125 notebooks constituting 26,000 neatly handwritten and partly typed pages— to her nephew Erik af Klint, a vice admiral in the Swedish navy.In his will, he in turn bequeathed all of Hilma af Klint's works to his son, Hilma's great-nephew, Johan af Klint. It was Erik and Johan af Klint who recovered the paintings from the attic of Kalavägen 56 where they had been housed during the 20-year wait period. Jung also left behind such a substantial amount of work and there was a substantial period before his works of art reached the public. Both have established foundations that protect and support their works.

Read Illuminating Parallels in the Life and Art of Hilma af Klint and C.G. Jung in its entirety here.