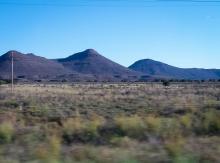 When I started writing ekphrastic poems, I didn’t know that that was what I was doing. I knew nothing about its millenia-old tradition, its theoretical debates, or its creative potential. I had no idea that ekphrasis was the label attached to poems about artworks; the academic flood on the subject was not yet in full spate.

In those first poems, published in the mid-1970s, I was doing no more than putting on record my responses to my first encounters with works by the South African artists Judith Mason and Alexis Preller, with a single international nod to Picasso’s Don Quixote, unaware that such responses had become one of the main functions of modern ekphrasis.  At that juncture, the “voice” of the poem was autobiographically mine as far as I could make it.

It was 1989 before I wrote another ekphrastic piece, followed by two more eight years later; all of them based on photographs of one sort or another. (In some circles, photographs were not yet included as artworks. Nowadays, the definition is rather more accommodating.) Thereafter, nothing until 2011. In fact, I published no poetry of any sort between 2001 and 2011. That hiatus was the outcome of a need for time and space to discover another voice, another modus operandi. I had nothing to say and no satisfactory means of saying it. Silence was inevitable.

The decade-long silence came to an end in 2011, when my wife (a poet writing in Afrikaans) and I were invited to join Marjorie Human, the artist, in the Allooi 2011 Poetry/Art Exhibition as part of the Volksblad annual Arts Festival in Bloemfontein in South Africa’s Free State province. The project sought to blend art and poetry in whatever creative ways the poets and the artists thought fit.  The project focused our creative attention on what I was now coming to understand as ekphrasis.

Then, when ARAS Connections opened its Poetry Portal in 2012, I decided to risk a submission. I have been writing ekphrastic poetry steadily since then.

Predictably, modern ekphrasis has been fraught with critical debates and academic skirmishes on the subject. However, as a poet and translator, I was less interested in theory and rather more concerned with the relationship between autobiography and ekphrasis as a practice. I’m one of those who believe that an individual’s written output, in whatever genre, is always autobiographical to some extent. I mention this because it exemplifies the so-called “reveal vs. conceal” dilemma that poets face frequently, a dilemma made more complex by any intimate materials that they might want to explore poetically. Putting one’s private life into a public arena, even the small one of poetry readership, is a matter of subtlety and caution rather than the in-your-face and stuff-the-consequences approach of some contemporary poets.  Perhaps such writers have no wish to compromise their truth, no matter how brash or hurtful, for any sort of harmony, domestic or otherwise. Nonetheless, I feel that writers have an ethical responsibility not to malign those with whom they have shared private lives at one time or another.

Readers may recall the controversy surrounding Robert Lowell’s volume, The Dolphin (1973). It earned a good deal of negative criticism, not only because he had quoted from his ex-wife’s private letters, which critics regarded as a questionable practice in itself, but also because he had actually altered their content. In a letter to him, his friend, Elizabeth Bishop, called it “infinite mischief”, asking if he wasn’t “violating a trust”. She states unequivocally: “art just isn’t worth that much.” And many agreed with her.

Read "Indisputable Evidence that the Trip was Made" Ekphrastic Poetry and Autobiographical Fidelity in its entirety.