"Intruders," "Animal Roots" and "Mother Earth": Tracking the Art Complex in the Work of Emily Carr 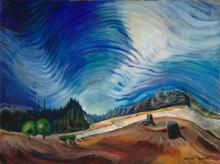 In highlighting symbolic events in the life of Canadian artist Emily Carr—her losses, her growing pains, her joys, and her achievements—a case is made for a transformative relationship with the art complex. These events are initially narrated providing a backdrop to the first half of her life. At age 56, however, she had a numinous encounter that symbolized the transition to the second half of life, ushering in a new relationship with an autonomous inner intruder— and so to signal this movement, the narration becomes analysis and interpretation while maintaining the storyline. For the next decade, her psychological maturation was reflected in developing her own painting methods, writing, and a more conscious relationship to self. In tracking these events and her accompanying psychological states, feelings, and emotions, there is support for Jung’s claim that the only genuine cure for neurosis is to grow out of it by attending individuation and thus to embrace “the approach to the numinous.” For Carr, such experiences arose through her relationship with “Mother Earth,” with the wildness of the Canadian west coast.

Long ago, there was a girl born, the fifth daughter to a devoutly Protestant family. She was the first and only daughter birthed in the rugged west coast of Canada, the first “Canadian” born  (on 13 December 1871) to a recently emigrated English family. She was born in wilderness, born during a storm—a symbol with which she identified and has claimed to have “tossled and wrestled with ever since” (Riley, n. d., part 1). Her name was Emily Carr. Emily had a wild spirit that was out of tune and out of time with the Victorian household of her parents. Her father, “ultra English”—straight, stern, and autocratic—was obeyed by Emily out of sheer fear and reverence (Carr, 1966b, p. 14). Her mother provided a buffer to the harshness of the family but did not mirror, for Emily, the love and acceptance that this extraordinary child so deeply needed. In this way, she was unmothered and remained unseen. Emily’s stubborn and independent character constantly challenged her English upbringing and the norms of her society. She was soon dubbed “Small” by her older sisters—not only because as the youngest girl she was small, but also because she knew nothing of the social ways of sipping tea, nibbling cakes, or acting like a proper lady (Riley, n. d., part 1).

The one place where she did belong was among the “untamed beauty” of her father’s open lily field, to which she escaped when punished or lonely (Riley, n. d., part 1). These escapes were frequent. This field and her closest friends, an imaginary small boy and a luxurious horse, became the “world of Small.”

Unlike her family, who only saw and associated with other English families, Emily was keenly aware of the world around her—especially the native people of the First Nations and the Chinese who kept the city of Victoria, British Columbia, running. In addition, the spectacular coastal environment of Victoria was home to the “cedar and fir that claimed [Emily’s] heart and imagination” (Riley, n. d., part 1). Like many children, Emily was full of curiosity and wonder.

Read "Intruders," "Animal Roots" and "Mother Earth":  Tracking the Art Complex in the Work of Emily Carr in its entirety.