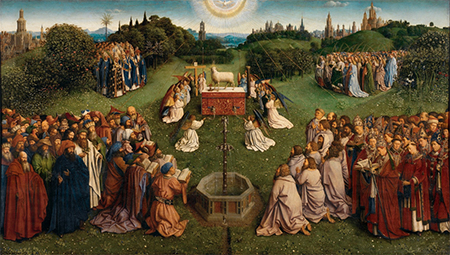 For the last ten years a team of dedicated picture restorers have been cleaning one of the masterpieces of Early Northern Renaissance painting - a massive triptych of 24 panels on oakwood in St. Bavo’s Cathedral in Ghent, known as the Ghent Altarpiece or more colloquially as ‘The Mystic Lamb.’ The painters were two brothers, Hubert and Jan van Eyck. The painting was begun by Hubert, the elder and, after Hubert’s death in 1426, completed by Jan in 1432. The closed wings explore the mystery of the Incarnation, and the open wings disclose the birth of the new order: the redemption of the world.

Only the central panel of the open wings is finished. Yet already a new vision appears, as though just freshly painted, and this is the face of the ‘Lamb of God’ - which seems to have completely changed. Or rather, the cleaning has revealed what Jan van Eyck actually painted over 500 years ago.

Imagine the restorers’ amazement when, after three years of meticulous work, an entirely new image shone forth from beneath five centuries of over-painting, the smoke of candles, and simply the passage of time.

Within a hundred years the original face had been painted over, giving us the gentle Lamb we have seen ever since: the compassionate face we know well through scripture – instantly identifiable, doctrinally exact, by now almost a consoling idea: 'Behold the Lamb of God who taketh away the sins of the world,’ the inscription on the altar beneath him says. This gentle Lamb forgives us but does not, in that moment, implicate us.