The Joseph Campbell Papers at the New York Public Library 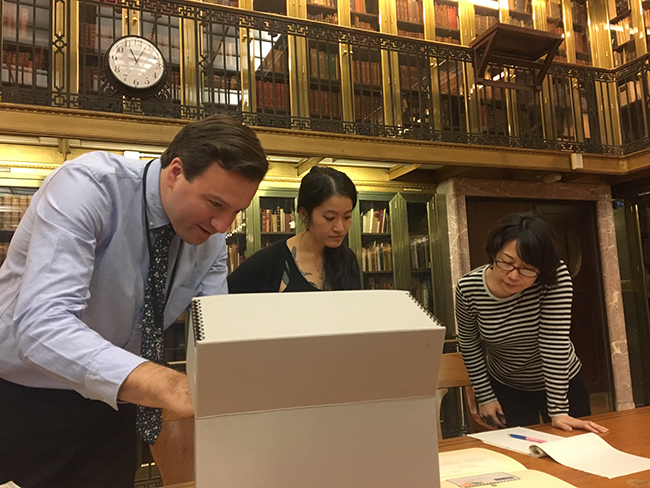 Recently ARAS staff was invited to see The Joseph Campbell Papers, which have been moved to the New York Public Library from Pacifica Institute in Santa Barbara. In order to get to the manuscript division we walked through the grand reading room and entered at the far end through a door that I had never noticed before. It felt like walking into the inner sanctum. There we were met by Thomas Lannan, the head of the Archives and Manuscripts division at the New York Public Library. On one of the tables there was a row of large gray boxes that he had selected to show us. We learned that Joseph Campbell had spent much time doing research at the New York Public Library during the many years he lived in New York and it seemed a perfect reunion that the collection is now housed there.

It was exciting to hear that the collection includes much material that has never been made available to the public before. There were also many wonderful photos throughout. It felt almost eerie to learn that Campbell’s handwritten dream journals were there to read. The collection also includes immaculate type-written records of all his lectures, beginning with his tenure at Sarah Lawrence College where he taught for 34 years. Another early lecture was The Idea of the Bodhisattva, which was part of Campbell introducing the East to the West. You can find Campbell’s correspondence with John Cage, to whom Campbell introduced the I Ching in the 1940s. This had a tremendous effect on Cage's music. We also found a lecture Campbell had given at the C. G. Jung Institute in New York City in 1965 with the brochure and a ticket neatly included.

Even closer to home was the fact that the collection includes many files from The Eranos Conferences where ARAS has its origin. The were created by Olga Froebe Kapteyn, beginning in 1933 when she decided to build a lecture hall on her beautiful land on Lago Maggiore in Switzerland. The conferences continue still to this day. Early on Olga Froebe Kapteyn decided to add images to the conferences to illustrate the particular theme of the year. In time, copies of these images became the beginning of ARAS but how that happened is a story for another day. Not only was Joseph Campbell one of the many outstanding speakers at The Eranos Conferences he also became the editor of six volumes of papers selected and translated from the annual Eranos Yearbooks. They were published from 1954 to 1968 and are still available at Princeton University Press.

If you find yourself in New York City, making your way to visit the Joseph Campbell Papers is highly recommended. More information about the collection can be found here.