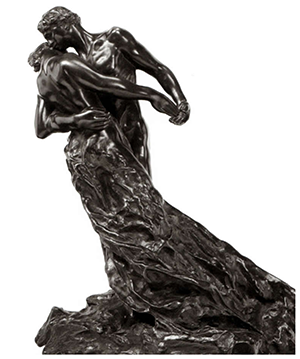 The aim of this paper is to combine modern women’s art with feminine mysticism of the Middle Ages and “minor” artistic artefacts done by nuns living in convents during the first three centuries of the first millennium.

Reflection on women’s artistic expression is a long-time interest of mine that found its moment of grace at “Les Papesses” exhibition in the Avignon Palace of the Popes in 2013. The real blossoming of this interest was expressed at the Art and Psyche conference in Sicily where I presented some of the material in this paper.

In 2013 an exhibition in Avignon at the Palace of the Popes, “Les Papesses”, put forth the question of discrimination in the art world towards women artists. The newspaper Le Monde, where I first read about the exhibition, titled the article “L’art est un bastion sexiste” – Art is a sexist stronghold. The title of the exhibition, compared with the historical meaning of the Avignon palace, seemed to me a declaration of war against the power exerted on women for many centuries by the dominant patriarchal culture.

Women’s art had always been considered inferior. Since the Middle Ages the artistic production of women, mainly nuns and upper-class women, was overlooked. Women’s artistic works couldn’t be exhibited in general and the works produced by nuns--tapestries, paintings or other works--had to be kept in an enclosure where only the nuns could see them. However, the best poetry of the period was composed by women. Moreover, in recent years the richness of nuns’ medieval artistic production has been recognized by scholars studying medieval art.

The location of the exhibition, the palace of Avignon, is in itself a demonstration of masculine power with no concession to roundness or greenery (Fig. 1). Built in stone, with tiny dark corridors, narrow and steep staircases, hidden passages that even today are difficult to detect, hint at treacherous conspiracies, cold spaces, indescribable tortures and the ostentatious show of power. The struggle for domination is written on every stone.

The exhibition of the women artists and their visions there suggested that  the palace had been conquered by the suffering bodies of the “inferior beings”. One of the places where the patriarchal dominant power had projected on women all the wrongs and all the infamies that could be imagined, was now conquered.

The other hint to a change in perspective from patriarchal power to the recognition of the diversity of the feminine power is in the title “Les Papesses”, the women Popes; the reference is from the legend of Pope Joan who was very popular at the end of first millennium.  One of the early chronicles of this legend tells that Pope Joan disguised her feminine identity and reigned for a few years between 850 and 900. The years of her reign were peaceful and just.

At the 2013 exhibition, Maman, Louise Bourgeois’ spider and Jana Sterbak’s spheres (Fig. 2) were awaiting the visitors.

Bourgeois’ spider is the archetypal summa of all the prejudice against women. At the same time, Maman powerfully reminds us of the unconscious fear of feminine power as well as the capacity to repair the broken threads of relationships by the patient weaving of the canvas. The roundness of Sterbak’s spheres is perfection that asks to be explored. The five contemporary artists, Louise Bourgeois, Berlinde De Bruyckere, Camille Claudel, Kiki Smith and Jana Sterbak, developed their artistic visions around archetypal themes coming from fairy tales, from the juxtaposition of religious art work of the past, from descriptions of the distress, fear and suffering that have accompanied and are always present in the lives of women.