In the following piece, poet, teacher and activist Iemanjá Brown feels for the life-death cycles of objects made an unmade by human animals. This is a meditation on the symbol of SEED, part of our ongoing ekphrastic writing series. A reading and performance night dedicated to SEED will be held on October 9th, marking the 7th installment of Ekphrazein. 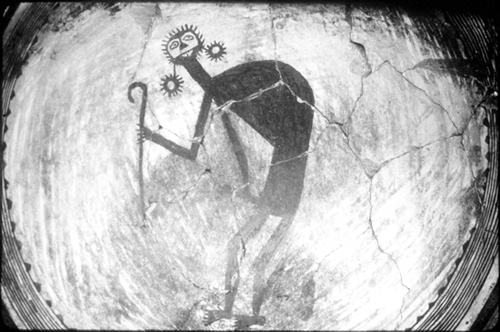 Painted on a Mimbres bowl from circa 1050CE, this figure has been identified by archeologists as Kokopelli, the flute player whose humpback is filled with seeds. Though the Mimbres branch of the Mogollon were identified by anthropologists as disappeared entirely after 1450, it is now recognized that they dispersed into other regions. I could find no record of how this bowl was unearthed, nor evidence of who considers it their possession. After archeologists began digging for Mimbres pottery in the early twentieth century, much of it was looted; finding its way into art auctions, museums and private collections. I discovered no instance of Mimbres pottery being returned to the scattered descendants of the artists who made them for daily use and burial ceremony, among whom include members of the Acoma, Hopi and Zuni tribes. If ekphrasis can be a conversation between language and the image, I hope it can also be a doorway to the sorts of listenings that this colonized land necessitates.

Crawed In
By Iemanjá Brown

aspiration pulled out and seething.

If salt-lick pastness surges on, uneasy

does it. Not everything

assimilates into a restless body.

in mouth here. And the sneaking

out of seed bank. Banks are

Look what punctures the deposit. Look what

decay is a burst of seed.

Yearn the shape enwombed in

big weathering and deposit while

grief packets dispersed with apology. How

is the unearthing? Is it sounding

Mouthing off into soil gnawed

by the wrong appleseed mines. Mine

is a bad law. Mine

entrails into the crack. Not mine. Just

over, then refused. Or