A Portal to the Imaginal: Steve Coleman, the Mill Valley Throckmorton Theatre, and Ingmar Bergman’s Fanny and Alexander 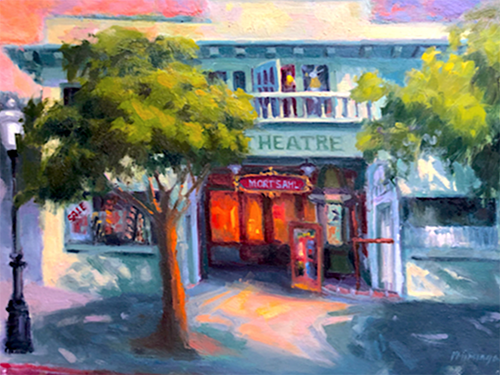 Everything can happen
Everything is possible and probable.
Time and Space do not exist.
On a flimsy framework of reality
The imagination spins,
Weaving new patterns.
-August Strindberg. A Dream Play.

In the small town of Mill Valley, nestled at the base of Mt. Tamalpais and just north of San Francisco, sits the Throckmorton Theatre (Figure 1). It has served as a community center for film and a variety of performing arts for over one hundred years. It first opened showing Charlie Chaplin movies in 1915 and more recently has witnessed a spirited renaissance under the direction of Lucy Mercer. It has attracted artists, musicians and performers from around the globe, offering music concerts and festivals, comedy, youth theatre productions, salons, classes and art exhibitions. Musicians including Carlos Santana, Norah Jones, Huey Lewis and Sammy Hagar; comedians like Robin Williams, Mort Sahl, and Dana Carvey; actors such as Ed Asner, Diane Wiest, and Tony Shalhoub; and community members from diverse parts of the area have all felt at home and creatively inspired on the theatre’s stage.

Steve Coleman and the COVID Moment

Among the many treasures of the Throckmorton Theatre, none has played a more important role than Steve Coleman, a resident of Mill Valley since his childhood in the mid-1950s. Steve has been the set designer and much more at the Throckmorton Theatre for twenty years. In turn, the Throckmorton Theatre has served as his studio, workshop, and playground for collaborative projects. Steve’s personality, energy, talent, and spirit are a living portal to the imaginal. He embodies a bridge between our everyday reality of twenty-first-century America and other times and places, including psychic spaces and realities. Steve does not use a cell phone; he does not use computers; he does not own a car. He carries a sketch book at all times and his imagination roams the natural world and other historic eras as he evokes a world that beckons with delight, enthrallment, and mystery.

During the era of COVID, Steve has come to play an even more special role at the Throckmorton Theatre. He would never claim to be a shaman, but he and his collaborators have taken on the responsibility of keeping the spirit of the theatre alive in the dark times of the pandemic. Steve spoke to me about the impact of the siege of COVID on the Throckmorton Theatre:

“It makes me so sad when I see the empty stage and just the columns on the sides of the proscenium. It’s like I could sense all the ghosts of all the people that ever performed in the theatre. I have seen so many performances, so many hours of being with the performers and felt the connection with the audience. And, it would make me weep because it’s all lost. I mean we’ve just been in a state of frozen disconnection.”

“A state of frozen disconnection” is a good description of what happens when a pandemic strikes and when the dark mood of a dystopian vision of the world takes possession of the collective psyche as it has in this contemporary time. Among its many casualties is the capacity to imagine a positive future. In such a mood of profound dis-ease, fear, anger, uncertainty, sadness and loss, Steve took on with an unassuming charisma the role of breathing life into a theatre on life support.

Some two months after the theatre had to shut down in March 2020, a Throckmorton leadership team consisting of Steve Coleman, Lucy Mercer, Mary Dilts and Bruce Treymane gathered for a group Tarot reading (after all, this is Mill Valley, California and the esoteric has its place and meaning). The question that the four held in their minds and hearts while consulting the Tarot concerned the future of the theatre. With the duration of the shutdown unknown, could the down time be used to imagine potential new beginnings? What were some strategies for survival during COVID? The overall theme that emerged from the reading was “the Moon” which, according to the Wild Unknown Tarot Guidebook (by Kim Krans 2012) suggested to them: “the shadow realm, where dreams, fears and mysteries are born. Many great artists have roamed this inner landscape. It’s where imagination and creativity drift freely upon the midnight air.” In the photograph next (Figure 5), Steve is accompanied at the Tarot reading by his long time alter-ego puppet companion in his tattered clothes whom he describes as “a character who has outlived his period of history and has left that world behind, only to find himself disheveled and disoriented in a contemporary world that he sees filtered through the lens of another time and world.”

Read A Portal to the Imaginal: Steve Coleman, the Mill Valley Throckmorton Theatre, and Ingmar Bergman’s Fanny and Alexander in its entirety here.