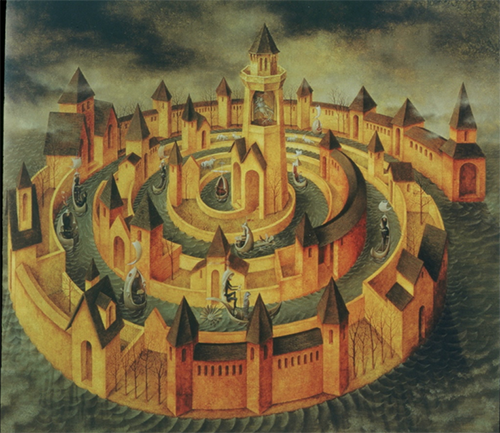 As the year 2022 begins, I reflect on why it feels the right time to offer this work on Remedios Varo’s Spiral Journey to ARAS Connections. Perhaps it is due to the sense that, at this moment in history, our collective consciousness needs to see the immense creativity of a woman both deprived of her homeland by a Fascist regime’s victory in the Spanish Civil War and who was forced to flee her adopted country when the Nazis invaded France.

Her courage and tenacity, along with an extraordinary capacity for friendship, according to Janet Kaplan, allowed her to finally find a hospitable new home in Mexico where her creativity bloomed and her greatest works were painted. Jung said: “ Only a thing that changes and evolves lives, but static things mean spiritual death “ ( C.W. vol. 18 para 1595 ) Remedios’ life and art was one of both change and spiritual evolution. In this way it is a beacon for the times we are living through now.

The labyrinth, the spiral path is the sacred approach to the world invisible to human senses, but ever present as an image within the soul.

Like a snail’s shell, the spiral path is where we live. It is all around us – even though we cannot see it.

The spiral is associated with the moon and the rhythm and flow of the oceans’ tide. It is the rhythm and movement of folk and tribal dance and the blur of the Whirling Dervish. Dance was one of the earliest forms of worship. It invoked fertility, protection and transformation and was, therefore, essential to the shaman.

The spiral is linked too with the journey or pilgrimage. While most often we read about the masculine heroic journey, Remedios Varo’s paintings created during the last decade of her life, reveal the thresholds of the uniquely feminine path toward wholeness.

This journey is often imaged as a labyrinth or spiral.

“the treading of an obstructed path is the key motif of labyrinth symbolism. The maze being a symbol of the outer shell around the hidden center. Overcoming the obstacle that obstructs the entry into the center denotes transformation; and re-emergence from its re-birth.”

And so, we carry with us the ubiquitous historical and cultural nature of this archetypal image of the spiral, as we explore this motif in Varo’s paintings.

Read Remedios Varo: Her Spiral Journey in its entirety here.