Sacred Deities of Ancient Egypt: Ferocity and the Feminine & Moon and Earth as Expressions of the Divine Masculine 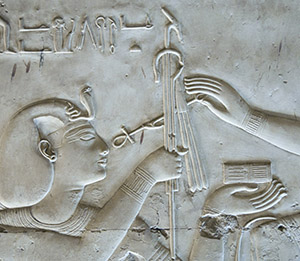 THERE ARE MEMORIES THAT WILL BECOME STORIES

I entered Luxor Temple, one among a jostling throng of tourists. Spontaneously, I glanced back over my shoulder. I was gobsmacked—there is no other word to describe the physical force of my experience—by the sight of a beautiful low relief carving in black stone of Seshat. Over her linen dress, the goddess wore the pelt of a leopard, a garment traditionally worn by sem priests who knew the sacred secrets necessary to prepare the deceased for burial. Seshat faces an inner wall. Her placement means she remains hidden and thus usually goes unseen. Only an accidental turn of the head at precisely the right moment reveals her presence.

Understand that in this moment of confrontation, I did not know her name. I did not know she was the mistress of all forms of writing, ranging from lists of captured slaves and bounty to sacred religious texts. I did not know that the precise meaning of Seshat’s enigmatic headdress remains unknown. Fully clothed in a linen dress, the claws of a leopard brushing against her arms and legs, counting the years of the reign of the pharaoh, graced by her mysterious emblem, Seshat launched me on a journey that would span a decade. Over time, my quest would culminate in a book titled Sacred Deities of Ancient Egypt. But Seshat was the beginning. Her intriguing symbolic fusion of instinctual, bestial energy combined with intellect and knowledge; her role as a guardian of texts both mundane and sacred; her enigmatic emblem; and her companion, Thoth, Lord of the Moon, sustained me as my creative pursuit grew from one year to many years. We had, I discovered, a reciprocal relationship. Seshat embodied aspects of myself that I simultaneously knew but did not know. Meeting her resembled a Mobius strip, a topographical phenomenon in which the surface moves seamlessly and continuously from the inside to the outside and from the outside to the inside.

Remember, I was an older woman in her late sixties to early seventies, drawn to Egypt initially on a lark. I did not imagine I would become a solo traveler in a culture where I was an outlier. I did not envision sitting on the ground after sunrise with a stonemason and his crew, drinking tea with sugar in small glass cups while eating ful medames, a traditional concoction of fava beans, at breakfast before climbing a wall of scaffolds to see their restoration situated at the very top of one of the temple walls. I did not envision standing in awe in Hathor’s temple at Dendera in the aftermath of the Egyptian revolution of January 2011. The temple was empty, mercifully devoid of tourists. It had become a silent sanctuary filled with echoes of the past. It is my hope that as you read this written reflection, you may also find yourself inexplicably, even deeply, drawn to the figures or mythos of one of the gods or goddesses of ancient Egypt. May you also experience the uncanny moment in which the kohl-lined eyes of a deity spring fleetingly to life and you feel seen, known, recognized.

Read Sacred Deities of Ancient Egypt: Ferocity and the Feminine & Moon and Earth as Expressions of the Divine Masculine in its entirety here.