Tom Singer
We are just beginning to see the fruits of our initiative to grow the ARAS archive by including new images and developing the commentaries that place the images in cultural and archetypal context.   To remain alive and vital, the archive needs to continue to grow its collection, especially in the areas in which we are underrepresented, including our collections of African, Asian, MesoAmerican, and Australian Aboriginal images.  In this edition of ARAS Connections, we are excited to preview new material from Australia and from Tibet.  Such material does not grow on trees; to create new files, we need individuals with a passionate interest in specific images along with the the commitment of time and energy to conduct the scholarly research that makes the ARAS archive and its files a uniquely valuable resource.  Craig San Roque is taking a first, huge step in adding to the Aboriginal collection and Chantal Lee and Giada Shaver have contributed three sensational new files on Tibet.
Craig San Roque, a Jungian analyst living in Alice Springs, Australia, has agreed to take on the leadership of developing the aboriginal section of ARAS.  Some of you may be familiar with Craig's previous contribution to Online ARAS.  Along with the artist Joshua Santospirito, Craig has created the first ever Jungian graphic novel, The Long Weekend,, a story about life in Alice Spring which can be found on ARAS here.  The imagery of aboriginal Australia is a living tradition and, as with any symbolic material, needs to be approached with the greatest sensitivity and respect for those who create it and for whom it remains an essential part of knowing who they are and how they fit into a larger scheme of things.  That is how Craig has approached this exciting new ARAS project and it is our hope that this is the first of many future Aboriginal contributions to ARAS Connections and the ARAS Online archive itself.
The same can be said of Chantal Lee and Giada Shaver, both of whom worked with the Rubin Museum of Himalayan Art in New York and are volunteers at National ARAS.  They are models for what we hope will become a more common route for symbolic imagery and commentary to find its way to the ARAS archive, namely through the efforts of dedicated, independent scholars from around the world willing to submit symbolic imagery/commentary to ARAS.  To develop a file for ARAS is not a simple undertaking as it requires both a passion for the image itself and the willingness to undertake a serious, scholarly study of the cultural context of the images and their symbolic meaning.  Images flood the internet but ARAS is a unique online site in that it not only features imagery from around the world but explores that imagery in terms of its archetypal, psycho-spiritual underpinnings.  As independent scholars, Chantal and Giada have taken three striking Tibetan images and provided a symbolic context that gives them meaning in terms of our being able to approach the images with curiosity, intelligence, and reverence.  We are deeply grateful to them for their contribution and for setting a standard for how others may contribute in the future to growing the ARAS archive in the future.
Tom Singer
Co-editor of ARAS Connections 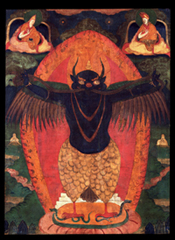 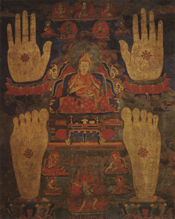 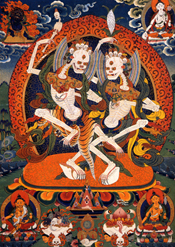