I first came across Caterina Vezzoli’s exceptional work in her chapter, "Queens, Saints, Heretics, Prostitutes: Women in Italy" that she wrote for Europe’s Many Souls which I co-edited with Joerg Rasche.  I found that traveling along with her imaginative exploration of  Italian women through history was thrilling and compelling.  In the final sentence of “Le Genre à l’Oeuvre” which appears in this edition of ARAS Connections, I found myself nodding in agreement that what she writes is not only true for her, but through her, for every reader who joins in her journey:  "To combine analytical psychology, history and art is a way to rejuvenate my psyche and my understanding of the world of women.”

The "understanding of the world of women" that Vezzoli communicates in writing makes clearer to both men and women the price women have paid over the millennia at the hands of the patriarchy and simultaneously the enormously glorious contribution women have made to the expression of eros in art and in the spiritual life.  I have often recoiled at how the use of the  word “patriarchy” has become something of a politically correct cliche that obscures rather than fosters understanding.  With Vezzoli’s writing, I find myself easily embracing her condemnation of "the patriarchy" and the price both women and men have paid under its oppressive reign.

A different type of wall from that which has divided men and women through the ages is that which Jung noted in Man and His Symbols when he wrote about the Berlin Wall:  “Our world is dissociated like a neurotic." 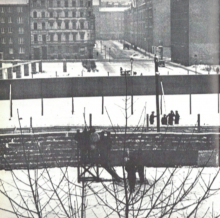 It has been reported that Man and His Symbols was conceived by Jung in response to a dream he had in which his work was understood by a wider public.  Although it remains mostly an unrealized dream, many of us believe that Jung’s approach to symbols should be of the greatest interest to a broad audience because symbols in public life move us so powerfully.

Because symbols are polyvalent, it is important to try not to be one-sided or partisan in our approach to them.  That is very hard in a highly partisan time and perhaps no contemporary evocation of a symbol has been more divisive than “the Wall.”  In the article that I have contributed to this edition of ARAS Connections I did my best to take a non partisan approach to the powerful symbol of the wall, while simultaneously making clear my own political stance.  We walk a tightrope when we both acknowledge our own political point of view while also trying to understand in good faith what motivates our political opponents.  But, we must acknowledge that symbols move us deeply in the public sphere and we should not shy away from trying to understand the depth of their meaning that speaks to many people, no matter which side of the wall as symbol they stand on.