Restoring the Sympolic to the Symbolic

ARAS Connections was recently awarded the Gradiva Award for best e-magazine of 2019, an unexpected and great honor. We are extremely grateful to the National Association for the Advancement of Psychoanalysis (NAAP) for choosing us for this award. The actual trophy is a stunning 8 inch high glass tablet with the image of Gradiva etched into the glass. Only on closer inspection did we discover that the inscription of the word “Symbolism” as it appears in our name on the trophy was misspelled as “Sympolism”. 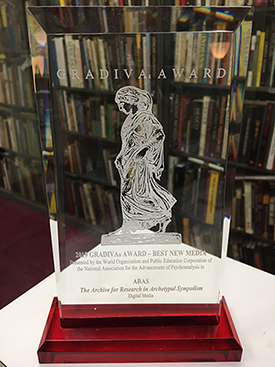 The misspelling touched a funny bone in all of us at ARAS that left us playing with the sound and meaning of the misspelling for some time. Without quite knowing why I began to think “what is the difference between symbolism and sympolism? Why did it strike me as funny?” I think it is because, in addition to being a simple misspelling, on another level it is a perfect unconscious concretization of the fact that it is very difficult to bring a truly symbolic attitude into the modern world without it becoming “sympolism”. What does “sympolism” make one think of? Because it sounds like “simpleism” it suggests the tendency to simplify, to strip the symbol of of its polyvalent depth of meaning and emotional resonance and make it one simple thing.

This is the constant dilemma that we face at ARAS and in the world. How can we bring the depth of meaning and emotional resonance of the symbolic realm into a creative relationship with the everyday life of all of us around the world? Our name itself, The Archives for Research in Archetypal Symbolism, or ARAS, does not lend itself to easy understanding or a feeling of accessibility. Maybe by the time the engravers got to “Symbolism” in our name, they had had enough and wanted to “simplify” it. The fact is that symbols matter deeply to us at ARAS and we are constantly struggling against the tendency to reduce “symbolism” to “sympolism” through the branding and trivializing of our mass media marketing and culture. In this context, this edition of ARAS Connections seems particularly timely because our two authors focus on how trends in contemporary society reflect a hunger for a symbolic attitude. Joan Golden-Alexis explores the interface of the symbolic and contemporary society in “Written in the Flesh:  The Transformational Magic of the Tattoo.” And Robert Tyminski shows how alive the hunger for the symbolic is in “The Archetypal Power of Images in Videogaming.” If one takes a “sympolic” or simplistic attitude to tattoos and videogaming, one can miss the depth of the symbolic yearning in this contemporary appropriation of archetypal imagery.

Let me give another example of the difficulty of clearly communicating how archetypal symbols that appear in many different cultures and eras are all around us and effect us in our everyday, contemporary lives. ARAS recently featured a lovely entry about ARMOR in its monthly Archetype in Focus email and posted it on Facebook. Shortly after the posting appeared, in an entirely different context, a very contemporary example of ARMOR as symbol appeared in a CNN article and picture that featured a gleaming Donald Trump Jr. proudly displaying his semi-automatic weapon. The article focused on the fact that the manufacturer of Trump Jr.’s weapon embossed symbolic images originating in the Christian Crusades on the gun’s lower receiver. (The gun also featured an image of Hillary Clinton behind bars). In making the connection between the posting on ARMOR and the image of an armored Donald Trump Jr., ARAS added the Trump image to its Facebook posting. It felt like a synchronistic appearance of ARMOR as a symbol in our contemporary culture wars.

The posting of the Trump image did not make it clear enough that the CNN article actually explored the symbolic meaning of the Christian Crusader imagery and referred directly to the power of symbols. More than one Facebook participant in the thread on ARMOR complained about the inappropriateness of the image and how it was not befitting of ARAS to post such an image. After considering whether to respond or not, ARAS decided to engage directly with the Facebook participants who took exception to the posting. We pointed out that the link to the image also included the CNN text about the symbolism of the image. We said that we were trying to show that the symbolism of ARMOR is alive and well in its potent appearance in contemporary life. One of the Facebook posters responded by saying that he thought ARAS had been “lazy” by simply posting the image of Trump without an explanation or rationale for featuring the image. ARAS had not been clear enough in making sure that the text of the article, and not simply the picture, was highlighted. It was the text of the article that spelled out the symbolism that was such an important part of Trump’s ARMOR. But, after all, who looks to CNN to offer symbolic commentary on the news of the day!!! The same Facebook commenter later posted that it had been he who was “lazy” for not reading the article before commenting. We ended up feeling good and gratified by engaging our Facebook critic who responded in the most thoughtful and surprising way. We actually had a conversation, a dialogue, a real exchange that bridged the gap between “sympolism” and symbolism, between personal contact and more impersonal internet communication. We all know the pull in contemporary life and its barrage of information to skim along the surface as we are carried from one topic to the next, from one image to the next, without taking the time to consider meaning and depth. This is how “symbolism” becomes “sympolism” in which we leap from one simple and simplistic misunderstanding and miscommunication to another. It is the symbolic power of the Tweet that reduces the symbolic to the sympolic. Part of ARAS’ mission is to reverse this trend and restore the “sympolic” to the “symbolic”. That is very hard in today’s world on just about any topic, but it is the goal of ARAS to find good ways to make the reality of timeless symbolic content relevant to our world today. The fact is that symbols are all around us and impacting our psyches all the time. It is ARAS’ mission to bring this underlying symbolic reality into clearer relationship with our everyday reality.