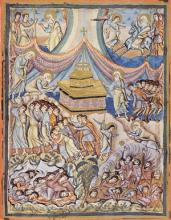 Most of us, at one time or another in our lives, have had Plato’s thought that the world is "a living being endowed with a soul and intelligence.”  In James Cameron’s film Avatar, this notion is projected into the future of the mid 22nd century in the form of the "tree of souls" which has the capability of direct neural link with living creatures.

This is a vision of a unified world in which all living things are interconnected through a world soul.

In 1970, when I was finishing medical school, I had such a dream:

I am attending a United Nations session and the discussion is focused on setting up a colossal cistern or water storage facility that will sit on top of the world. Whoever needs water in the world at a given time will be determined by a computer (this was long before computers were sitting on top of the world)—so that water for the whole earth will be regulated and distributed equitably.

I thought to myself, “I don’t like computers very much but maybe they could do a better job distributing water fairly than politicians have done. It was a global watering hole (“whole” as I misspelled it in my dream book, where I also sketched the dream image on page 3).

At the time, I did not think of this as a representation of what Jung called the “anima mundi”. In fact, I didn’t know a thing about the concept. I took the dream quite literally and thought about it in terms of finding a way to actually distribute the world’s water equitably. It was only several months ago, in early 2016, when I was preparing to give a talk in Sydney on ARAS and cultural complexes that a distant memory of the dream compelled me to go back and consult it again.

When we set out on life’s journey we seldom have a real clue about where we are heading or what may, in the background or unconscious, be guiding us. Forty six years after first having the dream, it occurred to me for the first time that a great deal of my creative energy has gone into trying to realize that dream, but in a symbolic rather than concrete way--even though the so called concrete reality of distributing water equally around the world is even more of a dire necessity now than it was then. But, if we also imagine the dream to have a symbolic meaning, the water can be seen as the realm of the creative unconscious and the dream can be seen as promoting the global distribution of life giving, creative energy through visions and imagery originating in the collective psyche—conscious and unconscious. This brings us pretty close to the vision of ARAS whose goal is to share with the world through the miracle of computer technology curated symbolic imagery from all cultures of the world and from all eras of human history. At ARAS we believe that there is a central, symbolic cistern which is the source of life-giving and sustaining imagery/energy that should be shared globally. We also affirm the idea of the anima mundi—of there being an underlying and unifying fluid reality of world soul that may find very different expressions in different cultures and in different eras, but shares in a source of common and deep meaning throughout time and place.

Read Why ARAS? in its entirety.