Written in the Flesh: The Transformational Magic of the Tattoo

This paper was presented at the 2019 conference Art and Psyche: The Illuminated Imagination. 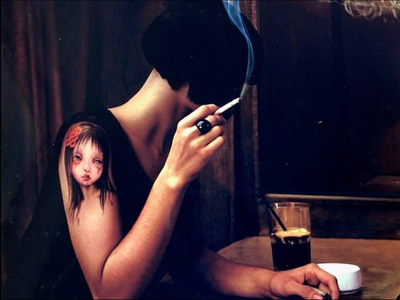 What lies deepest of all in man, is the skin—Paul Valery

In this paper I am going to approach the subject of the tattoo and the process of tattooing from two perspectives; the socio-political, and the personal. Ultimately, on the most intimate level, in the realm of the personal, I will explore the psychic process of six people who have chosen to tattoo their bodies.

I began my introduction to those who seek tattoos, and particularly the six people in this study, by spending one day each week in various tattoo studios. I listened, and listened, and never spoke. I soon discovered that the relationship between the tattoo artist and the person seeking a tattoo was often exquisitely intimate. The tattoo artist began the conversation by simply asking, “What kind of tattoo do you want?” Within seconds, a breathtaking story would unfold, transforming the moment from the present into something that held something old, and the beginning of something new. The artist would then excuse himself to sketch the tattoo. I marveled time and time, again, at how the artist could fathom so much, with so little information to go on. I never interfered in the dialogue between artist and client; I just listened. After some time, I began to get a feel for those artists and those clients that touched something in me. I began to record what they said, and take pictures. Finally, in order to round out this study, I found what I needed in the stories listed in websites, and from bits and pieces of tattoo videos.

In a society that is overtly characterized by untruthful political narratives, moral blindness, marginalization, and violent immigration policies, many of us are living with a growing experience of personal and social exile.  The sense of psychological exile aroused by the loss of a social-political context that is responsive to diversity, has increased psychic anguish and emotional numbness on all levels of our society.

Psychoanalysis, in its exploration of the human psyche, was designed to offer the “individual a sense of autonomy, and identity distinct from one’s place in the family, in society, and in the social division of labor.” (Zaretsky, 2004, p. 5). It was intended to develop a growing connection between consciousness and the unconscious, and the development of an ability to reflect, which would allow one to evaluate oneself, and the society in which one lives.

However, In the last several decades,  both in academic circles, and as a method of healing, analytic psychotherapy and psychoanalysis, with its central focus on the unconscious and the multilayered psyche, has decreased in popularity. Seemingly, reflective of the current zeitgeist, cognitive therapy with its narrow focus of symptom reduction, and helping one to adapt to the current environment, has taken the lead. As a goal, symptom relief has replaced symbolic understanding of the symptom—that is, the symptom understood as an access point to the unconscious, and to the potentially transformative aspects of the personality. In a society where many of its citizens have a limited access to a psychology supporting such transformations, those living with a profound sense of social exile, and psychic pain (both personal and social), often turn to some form of artistic expression of human truth that can break through this.

Read Written in the Flesh: The Transformational Magic of the Tattoo in its entirety.