Over the past three years, ARAS has been forming a vision for our future. After the successful launching of ARAS Online and the publication of the world-wide bestselling The Book of Symbols, we began asking ourselves “What next?” How will we grow ARAS in the future and present it to a world wide audience while maintaining our core commitment to the development of an archive and institution that explores symbolic imagery from all cultures and all eras? Cultural and archetypal commentary distinguishes ARAS from other online sources of images that flood the internet without any context for understanding and perspective. In depth context of symbolic imagery with cross-cultural connections is at the heart of our mission. Some years ago, I heard that the future of internet content would be “curated content”—content that has been carefully edited, selected, and vetted. ARAS has been in the forefront of “curated content” and will remain one of the few sites that actually lives up to that standard.

We came up with two primary areas for the focus of our vision for the future:  “Growing the Archive Itself” and “Growing ARAS in the World”. In this Welcome I want to report on the creation of the ARAS International Advisory Board which represents a significant step in our effort to fulfill that part of our vision focused on “Growing ARAS in the World”. After the core of ARAS came to the United States from original presentations of art exhibits created to illustrate analytical psychology and its relation to other disciplines at the Eranos Lectures in Ascona Switzerland in the 1930’s, most of its research and development was centered in the United States. ARAS continued to explore symbolic imagery from mythology, religion, art history, archaeology and other sources from around the world, but was now fundamentally a US enterprise. The creation of the world wide Internet changed our reach and potential enormously. We were relatively early in the creation of ARAS Online at the turn of this century and we are now in a position to further develop our reach by engaging world wide scholars in our effort. With that in mind, we have created an International Advisory Board with the purpose of bringing new material to us from around the world and in helping us better relate to and reach out to a world made both smaller and larger by the reach of the Internet. Here are the first members of our newly created International Advisory Board whom we welcome and thank for joining with us in “Growing ARAS in the World.” 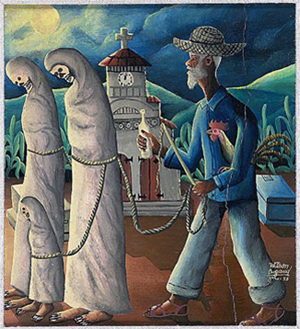 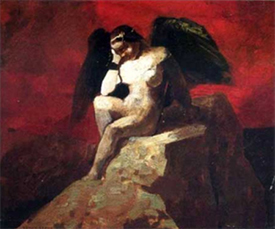 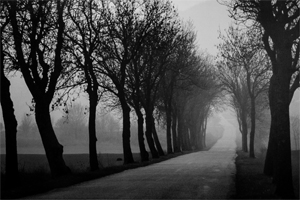 A heartfelt thank you to everyone who submitted a poem for the last “Invite to Write”, inspired by the image of “Circus,” which you can read here.  I continue to be moved to places of wonder and delight with your submissions.

This time we publish a poem along with this wonderful painting that served as its inspiration in true Ekphrasis tradition.  It was written by Eldon Beck and the title of his poem also gave the name for the theme of this edition, “Unknown Road to Somewhere”.  I hope you will feel as excited as we are and send your new poems inspired by this image to poetry@aras.org by August 15, 2015.

Who can break from the mist and travel
through nature with me...
Joseph Stroud

Lure of the unknown compels I travel the road
that rises then dips into the void of a foggy nowhere
Frosted pastures wait for sharp plows, locust trees
in black bareness edge the lane, thin branches arch,
a twiggy gateway to hazy mysteries. Here I lean
into the breeze, caress gnarled bark, hear blackbirds
chatter in the hornbeam hedgerows. But the lonely
road entices, this gateway demands I discard
contentment and dive into the stew where edges
vanish, pride debates humility, sorrow weaves
her tapestry frayed by torn threads