Apocalypse Now: A Psychology of Conception in Lorenzo Lotto’s Annunciation of 1535 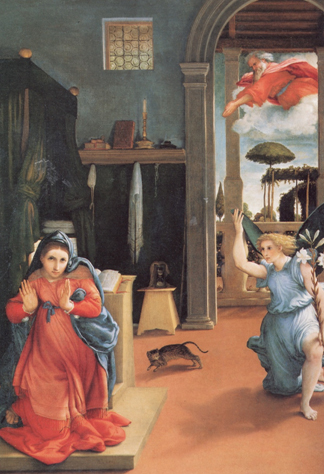 Judged by conventional iconography Lorenzo Lotto's Annunciation of 1535 is uncanny, uncomfortable and strangely at odds with typical representations of this seminal subject (Fig. 1). However if "read" like a dream it carries its own insights into an archetypal realm where the son of God is incarnated in a young virgin who becomes a mother. Her son is divine and human. The conception is divine and human. The Annunciation is a paradox that Jung described as a moment of synchronicity -- when eternal and serial time intersect and meaning is born. As the Christian myth tells us, this announcement and conception of the divine, which we could also describe psychologically as the manifestation of the Self, can only materialize in the human individual and it carries an enormous potential for imagination and creativity. Along with many others, Lotto's painting tells us that virginity is a vital precondition for conception to occur, but uniquely, he relates a sense of emotional tension and conflict, along with a highly enigmatic quality of that feminine virgin state, which is both the vessel of creativity and the medium of its inception into the material world of human consciousness.

A dictionary definition of the verb, to announce, tells us that its roots stem from the Latin annuntiare which combines two stems: ad nuntiare meaning to report and nuntius, the messenger. A reporting which includes a messenger. Along with “to proclaim and make known publicly,” the verb also means “to indicate beforehand, foretell”. In Lorenzo Lotto's painting, as in all others of the same subject the announcement of a divine conception is delivered by the Angel Gabriel to the young Virgin Mary. Conceive, from the Latin concepire is to take in, to cause to begin, to originate. Other meanings link the word to image, imagination and apprehension. Apprehend means to “arrest and seize” as well as “to perceive and understand meaning”. The heightened affect of Lotto's young Virgin who has been chosen to serve as the mother of Jesus suggests many things at once -- visceral fear, sudden seizure, foreboding insight, the uncomfortable border between life and death. These are all present at the moment of incarnation.

Read Apocalypse Now:  A Psychology of Conception in Lorenzo Lotto’s Annunciation of 1535 in its entirety here.