Interview with Chester Arnold - Part One 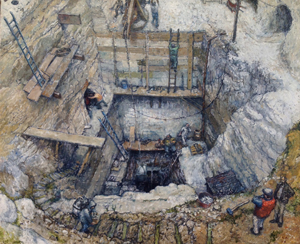 In this inspiring dialogue between the painter Chester Arnold and Tom Singer several other layers of fruitful dialogues appear – those between Chester Arnold and his students, between his exploration of the real world and the interior creative realm and as a constant throughout his work, the visual dialogue between his art and human history. Arnold’s work is currently part of a travelling museum exhibition, Environmental Impact, which opened at The Canton Museum in 2013 and continues to tour across the US through 2015.

Chester Arnold (CA): It’s a subject that I’ve worked on periodically… Probably the longest and most sustained period of so called excavation paintings was in 1983-84. It started when I was flying on a trip to Boston. In the flight magazine there was a photograph about the size of a postage stamp of some dig in Africa and there was a man in a white suit with a panama hat standing over the ground looking at a hole and I thought to myself “That’s such rich material, I’ve got to do a painting” because I couldn’t stop thinking about it. I’ve always loved imaging space from slightly elevated point of view because of the kinds of aesthetic structures that emerge in those perspectives when you’re interpreting or imagining a space. So I just started carving excavations into these little imaginary planes and what emerged was all kinds of unexpected things. I started to imagine excavations of… ancient things, modern things and future things.

This was during the Reagan years in which one never knew when a button could actually be pushed and civilization would be reduced to that little Anthropocene layer of 88 million years ago.

That was a pretty rich territory for me to explore…anyway this new painting [Figure 1] is another painting in that series. Because of the scale of this new canvas, the invitation was to dig broader and deeper and change the scale to make it  more vast and that appealed to me too. There are so many factors that go into making images originally…you know I have this lecture that I give my students and it’s a chart [Figure 3] which I devised in a sketch book that has a series of concentric circles and in the center of this universe of concentric circles is the “primal artist”, the child, the creative impulse…which, in my view, everybody is born with a certain amount or charge of.

And I saw that as my kids were growing up that they had very vivid imaginations and were motivated and inspired to make things all the time -- as I recall, I was too as a child -- and then slowly through school, other disciplines start to be overlaid on consciousness and then eventually that part of the brain—whether neurologically or just sociologically-- that creative part is forced into a corner in most cases unless there are parents who really encourage it or unless the impulse is so strong that it’s irresistible. So, my students, a lot of them--the older ones especially-- come in broken down in that sense, from originally having had some artistic experience earlier in their lives when someone either insulted them or they had a teacher who said ‘No, you’re no good. You should do something else.’  That turned a switch off in that creative impulse and so my job is to turn it back on because I think it’s still in there and I’ve found that it still is with a certain amount of support.  So, in the center of that universe is that “primal artist” with the individual creative fire…and the next level is the realm of friends and peers and family which is the world that the creative effort is shared with first. And then the world beyond that, the concerns beyond that become education, college and then each ring moves further and further out to a professional career. The last universal ring is eternity and the world beyond us, history beyond us.

Read An Interview with Chester Arnold in its entirety.