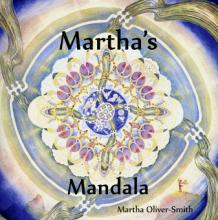 This story is filled with the charm and nostalgia of a time gone by, a time from the 1920’s to the 1950’s; but these stories also contain episodes of great suffering and trauma untreated and unacknowledged except through the painting of mandalas which offer calm and solace to the author’s grandmother Martha Stingham Bacon (known as Patty) who paints these images and quietly keeps them in a small room in the family home called the Acorns in Peace Dale, RI. At times it is hard to tell who the protagonist in this book is ---Patty, the author Martha Oliver-Smith (named for her grandmother), the mandala itself, or even C. G. Jung whose life and work touched this family in deep ways. From the image and the text we might say that the mandala has an aliveness, a psychoid or “psyche–like” quality that gives it power and a living presence for the grandmother and grandaughter especially through hard times. It is a physical/spiritual touchstone that symbolizes a higher self. (Caption under mandala above:  Martha’s Mandala by Martha Stingham Bacon, ca. 1940)

In 1922, Patty was overcome by a “tidal wave,” was hearing voices with wishes to kill her children and was psychiatrically hospitalized. At the time she had three young daughters Martha (called Marnie and the author’s mother) who was six, Helen, aged four and Alice was the youngest at age two. In addition, she was caring for her widowed mother and her dependent sister Harriet. Patty’s husband Leonard was working as a university professor and he eventually became Pullitzer Prize winning poet in 1940. As reported by the author and from the excerpts of Patty’s writings, the psychiatric treatment available at that time did not help. The voices did not stop but neither did her writing and drawing.  An introvert, she kept these life-sustaining activities to herself.  Leonard, also a writer, was an extravert and the life of the party.

Read this review in its entirety here.