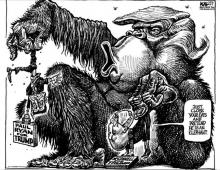 When small men begin to cast big shadows, it means that the sun is about to set.

What a trip we have been on this past year!!!!—a roller coaster ride into a black hole that has sucked up too much of our time and energy, altering for many of us the space time continuum.  As one of my son’s friends’ put it: “Trump has been groping the American psyche for a year and a half.” It will soon be over and I hope that our lives will be less burdened by the gravitational pull of the “dark matter” of this interminable election.

If, as Marshall McLuhan said, “the media is the message,” Donald Trump has taken over the world. Having Trump run for President is like having a terrorist bomb bring down an airplane every day—huge, dire excitement that incites obsessive attention. After dominating daily Google searches for all of 2016, Trump was finally out searched for a few days in late May when Americans frantically Googled “gorilla” because zookeepers at the Cincinnati Zoo shot Harambe, a 17-year-old lowland gorilla when a 4-year-old boy fell into the primate’s enclosure.

Of all the graphs and statistics I have seen during this election cycle, somehow this chart comparing searches for Gorilla vs Trump says more to me about what captures our attention in this country than any other that I have been following.  At about that same time in May, one cartoonist put Gorilla and Trump together, perhaps synchronistically.

Read Presidential Elections and Cultural Complexes in its entirety.