Trump Isn’t Fun and Neither Is Paradigm Shift: Where Are We Headed?! 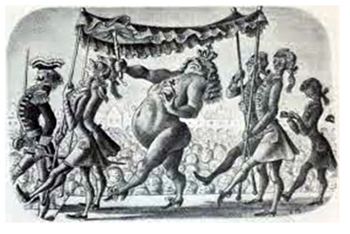 When I tried to sit down and write out my thoughts for this, I encountered enormous resistance. So I stopped and sat with myself and focused on what I was feeling in my body. What I heard was a voice that said, “I’m pissed off and I don’t want to organize or make sense of this madness.” And after a few more minutes I realized that what I was experiencing was the chaos that has erupted in our country and in the American psyche. This election season has left us in a state of chaos with, in my view, much more to come. So, the rest of my comments will reflect what’s roiling in me and some of what I see roiling in that chaos.

I would say that on November 8th, Election Day, the entire country and much of the world got a crash course in what the trickster archetype looks like and how it operates. There is a Navajo legend about how First Woman was organizing the stars and the constellations, carefully laying them out in patterned linear fashion on a huge Navajo blanket to be placed in the cosmos. Coyote happened to be wandering by, looked over and saw the stars laid out neatly on the blanket. “Hmmm,” he said and then he picked up a corner of the blanket, lifted it up and flicked it down, flinging the stars in disarray into the heavens. According to Navajo legend, that is how we have come by the various constellations that we see in the cosmos.

I had a similar feeling as I sat and watched TV on November 8th, confidently knowing that for all his extraordinary powers to hold a substantial segment of the American population in his sway, Donald Trump would lose the election. And besides, all the pollsters said so, as well as all the pundits. There we were, all smug and confident for a few hours and then suddenly, over the course of just a couple of more hours, we saw coyote pick up the corner of that beautifully woven tapestry and flick order into chaos.

Click here to read Post-Election Panel in its entirety.