On a recent vacation, I found myself reading with some amazement the final chapter of Anne Morrow Lindberg’s Gift from the Sea which was first published in 1955. Although dated by Lindbergh’s reference to our being flooded by information from print rather than the internet and social media, her almost seventy year old manuscript resonates on contemporary themes with such freshness that I felt she was giving expression to what I feel and care most deeply about today. Lindbergh writes:

“The search for outward simplicity, for inner integrity, for fuller relationship—is this not a limited outlook? Of course it is, in one sense. Today, a kind of planetary point of view has burst upon mankind. The world is rumbling and erupting in ever widening circles around us. The tensions, conflicts, and sufferings even in the outermost circle touch us, reverberate in all of us. We cannot avoid these vibrations. But just how far can we implement this planetary awareness? We are asked today to feel compassionately for everyone in the world; to digest intellectually all the information spread out in public print; and to implement in action every ethical impulse aroused by our hearts and minds. The inter-relatedness of the world links us constantly with more people than our hearts can hold. Or rather—for I believe the heart is infinite—modern communication loads us with more problems than the human frame can carry. It is good, I think, for our hearts, our minds, our imaginations to be stretched; but body, nerve, endurance and life-span are not as elastic. My life cannot implement in action the demands of all the people to whom my heart responds. I cannot marry all of them, or bear them all as children, or care for them all as I would my parents in illness or old age. Our grandmothers, and even—with some scrambling—our mothers, lived in a circle small enough to let them implement in action most of the impulses of their hearts and minds. We were brought up in a tradition that has now become impossible, for we have extended our circle throughout space and time.” 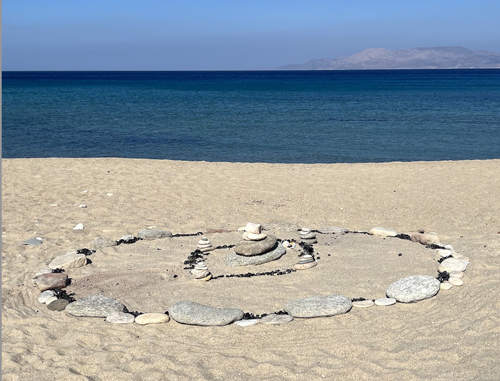 Following in the footsteps of Anne Morrow Lindbergh's 'search for outward simplicity, for inner integrity, for fuller relationship', Russ Messing created this mandala as a "Gift from the Sea".

This edition of ARAS Connections certainly bears witness to how we are confronted with problems that stretch us well beyond the human limits of our ability to digest intellectually all the information and misinformation that assaults us, our ability to put into action every ethical impulse that moves us, and our ability to respond with compassion to all the human suffering that we sense around us and inside us. The symbolic image sometimes allows us to approach that which is well beyond our human limitations for understanding, for ethical action, and for compassionate embrace. In the spirit of advancing the symbolic image as carrying the possibility for our apprehending the incomprehensible and stretching the limits of our minds, hearts and souls, we follow in the footsteps of Anne Morrow Lindberg:

“Today a kind of planetary point of view has burst upon mankind. The world is rumbling and erupting in ever-widening circles around us. The tensions, conflicts and sufferings even in the outermost circle touch us all, reverberate in all of us. We cannot avoid these vibrations.”

In this edition of ARAS Connections Constance Jameson takes us on an intense, truly overwhelming tour of Jung’s blood imagery in the Black Books. It is as if Jung was called upon “in his confrontation with the unconscious” to embrace with his mind, heart, and soul more than any human being might be expected to endure, much less integrate. Tom Singer renders through symbolic imagery the multiple levels at which war stimulates and overwhelms the psyche and plunges all of us into the incomprehensible suffering and unimaginable pain that human beings can inflict on one another and endure. Craig San Roque’s video of his ground breaking Long Weekend in Alice Springs takes us to Australia to experience the dislocation and disorientation of a culture devastated by the “advances of civilization.” And, finally Jay Sherry reminds us that there was a time in Jung’s life and hopefully in all our lives when the imagery that first entered our psyche and memory might have evoked a sense of beauty rather than fragmentation. As with Russ Messing’s “mandala as a gift from the sea” we all need a safe-place to open up our imaginations to even the momentary experience of wholeness in a world that is “rumbling and erupting in ever widening circles around us”.