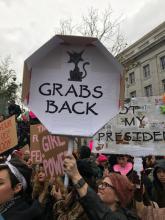 The idea of a Women’s March on Washington on January 21, 2017, the day after Donald Trump’s Inauguration, ignited the largest protest in American history, one that spread to 673 cities in 92 countries; an estimated 5,600,000 marchers in all. The idea traveled faster than wildfire through the internet.  The symbol of the marches—a sea of them, seen all over the world was the hand-knitted pink pussyhat.  It began with a Facebook page begun by Teresa Shook, a retired attorney and grandmother in Hawaii who posted the idea of the Women’s March on Washington on November 8, after the election results were in. The next morning, there were 10,000 responses, and from there--the rest is history.

I came back from Washington, D.C. profoundly affected by being there with over a half a million others: grandmothers, mothers, grand-daughters and grandsons; young parents with young children, fathers carrying babies, high school and college friends, gray and white haired older women, a diversity of ages and races—though predominately women and lots and lots of hand-lettered signs. There were no confrontations with police, kindness and consideration were the norms. It was, to quote a man I overheard, “the nicest mob scene I’ve ever been in.” There was hardly room to move, and no room to march, with so many of us packed into the mall.

Most of the women I knew who had planned to march in Washington, DC, in San Francisco and in other cities close to home, were participating in their very first march. Like me, they had felt called to the March – with some stress and anxiety at not knowing how it would turn out and online advice on what to do if it turned into a riot. The reality was anything but this. There was togetherness and human warmth, humor and kindness. After reflecting and contrasting this with other demonstrations, I think that this can be attributed to women’s oxytocin-estrogen response to stress that is in contrast to male-led adrenaline-testosterone protests that often invite retaliation by police. Researchers at UCLA called this the “Tend and Befriend” response to stress, which is characteristically what women do. Hillary Clinton’s unexpected loss to Donald Trump and the anxieties about what would happen next was a major source of stress.  Through tending and talking, women reduce the stress and as they do so, oxytocin (the maternal bonding hormone which is enhanced by estrogen) increases. We were in a sea of pink pussyhats and oxytocin.

Click here to read The Women's March on Washington: Pink Pussyhats - Enantiodromia in its entirety.

Click here for more images from the Women's Marches.

We welcome additional contributions as we are creating an archive of images from that most unique day. Images can be sent to . Thank you!