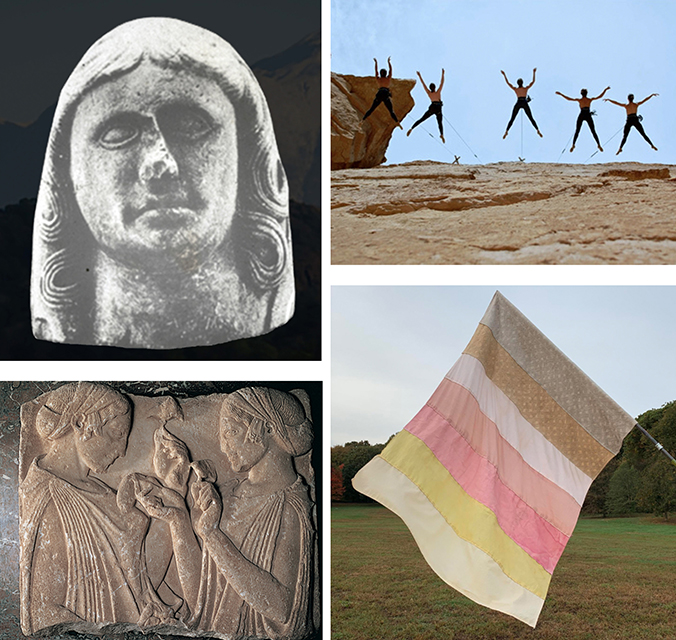 The first phase of the ARAS Gaia Project is Gaia: Then and Now, a series of online events presenting a way of knowing essential truths about the earth and climate change through the exploration of archetypal, symbolic images. The series has been designed with an eye towards moving back and forth between the ancient and contemporary stories about the human relationship to Gaia.

Click here for full descriptions of each event in the series.

Origin of the Project

With our expanding Internet presence and our growing understanding of how to use it, we have come to realize that ARAS has the potential and capacity to develop a series of ongoing projects in which we explore through our unique perspective major themes that are central to the concerns of the contemporary world. Two projects emerged spontaneously in 2020 that opened us up to the unexplored potential for this kind of application of ARAS. The American disease of racism that erupted once again with the murder of George Floyd on May 25, 2020 inspired ARAS Board member Deborah O’Grady to take the lead in producing “On Taking a Knee”, a video collage of archetypal images and music that quickly went viral and was viewed by 20,000 people in its first week online. “On Taking a Knee” demonstrated to us at ARAS that we are capable of contributing to a widening and deepening awareness of the outer and inner (or inner and outer) world.

The second, spontaneously emerging ARAS outreach effort in 2020 was “Art in a Time of Global Crisis:  Interconnection and Companionship.”  This project was spearheaded by Linda Carter and the Art and Psyche Working Group who worked closely with Ami Ronnberg and Allison Tuzo of ARAS to create a virtual gallery as a place of visual solace and inspiration during the covid pandemic. Five times a week a range of digital media including original artwork, works from well-known artists, photographs, sculpture, works from antiquity, music, and video was posted from the contributions of a world wide participating audience. The content was curated to speak to the emotional and spiritual needs of a locked down world in the grips of a deadly virus. These two projects--“On Taking a Knee” and “Art in a Time of Global Crisis”--  demonstrated to us at ARAS that we are able to contribute to a thoughtful exploration, discourse and understanding of our common humanity and its seemingly endless capacity for destruction and creation.

Based on these two previous experiments in applying ARAS’ unique perspective to racism and the pandemic, we are now initiating the ARAS Gaia Project as our way of responding to the global climate change crisis. We are calling the first phase of this ongoing project Gaia: Then and Now and, beginning in January 2022, it will consist of a series of live webinars that will be taped for future viewing as well. The presentations will focus on our relationship to the Earth as revealed through the study of ancient and contemporary symbolic imagery. With widely varying but complimentary perspectives, the speakers will present commentary, visual images, original videos, and engage with the online audience in interactive dialogue.

There will not be any charges for participating, although contributions to ARAS, a nonprofit, are welcome and encouraged.

A Vision of the ARAS Gaia Project

"I used to think the top global environmental problems were biodiversity loss, ecosystem collapse and climate change. I thought that with 30 years of good science we could address these problems. But I was wrong. The top environmental problems are selfishness, greed and apathy, and to deal with these we need a spiritual and cultural transformation, and we scientists don't know how to do that."  James Gustave Speth, Shared Planet: Religion and Nature, BBC Radio 4 (1 Oct. 2013)

Almost all of the discussion and debate about climate change has focused on the science that supports the notion that climate change is real and caused by human beings  vs. those who deny the reality of climate change, its human causes, and question the validity of the scientific evidence supporting its existence. That the debate has focused on the science is only natural in an era when the scientific method has been embraced for several hundred years as the primary way of knowing the truth about the earth and the universe. For a far longer period of time, there has been another way of knowing about the world—what we might call the mytho-poetic way of knowing. This way of knowing was often conflated with religious dogma and in the ensuing turmoil the idea that there could only be one truth about the world set scientific and religious ways of knowing at odds with one another. The conflict has lasted for centuries. Galileo’s discoveries being see as a dangerous threat to the orthodoxy of the Catholic church can be seen as the archetypal manifestation of this conflict.

At our current time when everything seems to be polarizing in our views of the world, it might seem odd to suggest that the scientific and mythopoetic ways of knowing can also be viewed as complimentary rather than at war. Each way is concerned with facts. Science deals with material facts, while the mytho-poetic deals with facts that are psychological and symbolic phenomena. One might imagine that these different ways of knowing would be swallowed by the beast of polarization, but in fact there has been a quiet but substantial movement towards bridging the science vs religious or mythopoetic ways of knowing. In that spirit, the ARAS Gaia Project seeks to explore the mythopoetic ways of knowing about the nature of the earth and the current crisis of climate change—not by putting itself in opposition to the scientific way of knowing, but rather as offering itself as a complimentary way of understanding our dire situation and how we got there. This inquiry centers around the basic question:  Can we find our way to a renewed sacred reverence for the Earth in all her forms—animate and inanimate. Cormac McCarthy articulates the existential urgency of this question beautifully in his mythopoetic way of knowing about “the maps of the world in its becoming” in the last sentences of The Road:

"Once there were brook trout in the streams in the mountains. You could see them standing in the amber current where the white edges of their fins wimpled softly in the flow. They smelled of moss in your hand. Polished and muscular and torsional. On their backs were vermiculate  patterns that were maps of the world in its becoming. Maps and mazes. Of a thing which could not be put back. Not be made right again. In the deep glens where they lived all things were older than man and they hummed of mystery.”  Cormac McCarthy, The Road