We are thrilled to announce that another ARAS project has reached fruition. Awhile ago, we announced in ARAS Connections that we had partnered with Artstor in such a way as to allow all ARAS subscribers to have access to  Artstor’s rich collection of images from the finest archives and museums throughout the United States. The second phase of this project has just been completed—16,000 ARAS images are now available on Artstor which can be accessed for free at museums, universities and libraries around the country by those without ARAS subscriptions. This is a wonderful achievement for ARAS as we have now attained a level of widespread accessibility and recognition that comes with the Artstor affiliation. This affiliation gives ARAS a reach into the world that it could never achieve through its own more limited resources. It should be noted that the ARAS images available on Artstor do not have the same advanced features available on ARAS itself. These features include the ARAS timeline and ARAS' unique search capacity which allows one to link symbolic images from one culture and era to another. But this new partnership gives the Artstor user of ARAS a rich sample of what an ARAS subscription can fully provide. Here is how Artstor’s announced the ARAS connection:

Artstor and the Archive for Research in Archetypal Symbolism have released more than 16,000 images documenting mythology, symbols and rituals in the Digital Library. The images in Archive for Research in Archetypal Symbolism (ARAS) explore the universality of certain iconographies and themes, illustrating commonalities in the ways human beings across the world have thought about and represented different phenomena throughout time. Each image includes commentary that points to its unique cultural history and contextualizes it within larger archetypal patterns and historical developments. The collection supports interdisciplinary research in the humanities, including the understanding of images in psychotherapy and dreams. It offers support for artists and designers to search for pictorial inspiration and for people of all ages to explore the power of symbols.

The advantage of the Artstor/ARAS affiliation can be appreciated and enjoyed fully by the ARAS subscriber. Here is how Artstor describes itself: "The Artstor Digital Library features a wide range of multidisciplinary content from some of the world’s top museums, artists, libraries, scholars, and photo archives, including rare collections not accessible anywhere else." For a list of the amazing image collections now available to the ARAS subscriber, go to http://www.artstor.org/collections

In short, on the one hand ARAS images and commentaries can now be accessed by many more students, scholars and lovers of art—although without the full search capacity provided only by a subscription to ARAS. And subscribers to ARAS now have at their fingertips access to some of the world’s greatest collections of images. 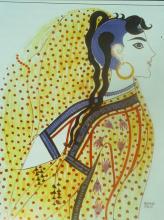 Virginia Beane Rutter's spectacular piece of scholarship, Saffron’s Offerings, is also a unique contribution to the study of women’s initiation rites as reflected in the symbolic imagery unearthed in the excavations of Akrotiri in Santorini, Greece.  Long a student and lover of ancient and modern Greek culture, Virginia has spent many years actually visiting Greece as well as taking imaginal journeys in the multiple layers of its psyche, culture, and history.  Along with me, she has given birth to the Ancient Greece, Modern Psyche series of conferences and books. This article first appeared in Ancient Greece, Modern Psyche:  Archetypes in the Making but the material is greatly enhanced in this version through the inclusion of  numerous color images which are prohibitively expensive to reproduce in a printed book as opposed to this online version.
-Tom Singer

This work evolved out of my love for the land, the people, and the language of Greece, where I lived during the summer of 1966, after a year of travel in Europe. Rocky islands, turquoise waters, and whitewashed buildings reduced to shimmering blocks of color by light and heat both concealed and revealed the energy of the old gods pulsing beneath everyday life. In the following years, returning to explore the ancient marbles and to study early Greek religion and ceremony dovetailed with my recognition of the archetypal mysteries in the psyches of modern women and men in analytic work.

When I visited the National Archaeological Museum of Athens in 1995, a group of frescoes from the island of ancient Thera, now Santorini, captured my attention. One of these is the Spring Fresco, which shows a rocky landscape with blooming red lilies and swallows diving in a joyous expression of nature (Figure 1). In another fresco two ladies are intimately engaged in a robing ceremony (Figure 2). These Bronze Age frescoes are from the site of Akrotiri, where excavation was begun in 1967. The Akrotiri settlement was abandoned after an earthquake, then covered over by a volcanic eruption around 1630 BCE. Archaeologists found the frescoes and other artifacts preserved by the volcanic ash. When I came to the site in 1999, the Petros M. Nomikos Foundation had recently installed an exhibit at the Nomikos Conference Center in Fira. This show reproduced the rooms to scale with photographic images of the frescoes that had been excavated thus far.

Read Saffron Offering and Blood Sacrifice in its entirety. 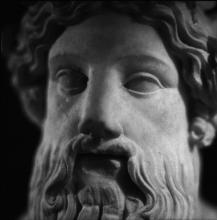 New Addition to the ARAS Collections 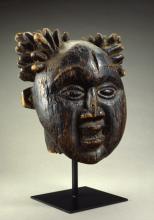 We have recently added a new collection of African images to the ARAS archive which was generously donated to us by the Bareiss Family. The collection consists of 213 artifacts from 10 geographical regions, mainly from Western, Eastern and Central African countries. To find the images within the archive, search on "Bareiss Family Collection" and they will all come up in your search results. 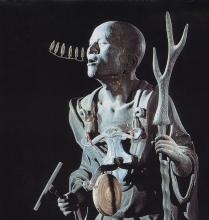 In this image, the Japanese priest Kuya opens his mouth to recite a mantra and his words appear as a stream of visible Buddhas, as if suggesting that his words are creating a new reality, a way of seeing. We hope that you will be inspired to write a poem on the theme of Words for this installment of the Poetry Portal. In the process you will change our way of seeing, as poems also do. Please click here to read the poems from last time on Wings. We look forward to hearing from you. Please send your poems to info@aras.org by June 15, 2016.