Well—who would have predicted that this edition of ARAS Connections would see the coming together of an extraordinary study of the color RED and a glowing image of the first visitors to National ARAS in New York City from the People’s Republic  of China whose flag is a brilliant Red.  So this edition is a totally unplanned celebration of the color Red and the people of China.  We welcome our distinguished visitors to ARAS from China.  And we welcome the exquisite work of Deborah Fausch who single handedly will change the way you see color forever.  Her study of Red brings me back to one of my earliest childhood school memories when I first learned to link different colors with their names and how to spell them. The feeling of the memory is one of joy, of essential things coming together for the first time, maybe even tinged with what Eric Neumann called "uroboric mysticism”.  But, now it would be good to see colors again before words were attached to them.  I suspect anybody who takes the time to read Deborah’s work will have such primal moments come to them, whether for the first time or from a very old time.

Flag of the People’s Republic of China

RED: amplification of a color 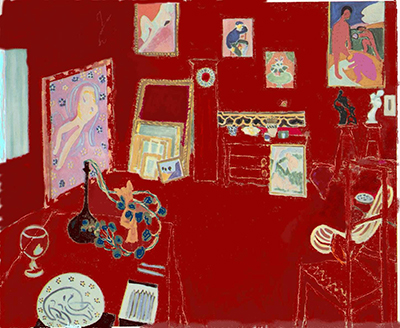 Deborah Fausch, PhD, IAAP, is a Jungian analyst. She has also taught and practiced architecture and urban design.

“The really important psychic facts can neither be measured, weighed nor seen in a test tube or under a microscope.  They are therefore supposedly indeterminable, in other words they must be left to people who have an inner sense for them, just as colours must be shown to the seeing and not to the blind.”  — C. G. Jung, Archetypes and the Collective Unconscious

You could tell the whole story of Carl Jung’s The Red Book by means of colors. It begins with a fight between the archetypal opposites of black and white. Red then interposes itself with its dimly perceived wisdom to lure Jung forward into the dark underworld, and into action to kill off the too-blond, too-heroic life of the ego.

Jung is pulled into the sacrifice of his red blood on a cross and then drawn into the joyous life of The Red One, beyond the opposites of good and evil.

He gets red blood on his hands from the death of a vagrant. The black and white of an ascetic anchorite and his words give way to a burning red sun rising over a yellow desert. Jung encounters black death, watching a bloody red sun glowing over dead bodies washed ashore from a dark sea. Red One and white-robed anchorite meet and, becoming companions, cancel each other out. In reaction, Jung retreats into solitary green growth of human being beyond the to-and-fro of human doing. After a brief flirtation with chameleon-like concealment, Jung encapsulates the god he next meets, red-and-blue-attired Izdubar, into a white egg.

Jung is plunged back into red violence and death in the service of life, eating the liver of a red-haired child while a shrouded, also red-headed, figure looks on. A gift of magic, the magician’s black staff of power, red blood and white bird, red blood for his soul, then taking refuge in the blue of Philemon’s kingfisher wings.

A green frog god is born. The dead demand their due of red blood. At tale’s end, a blue shade appears, walking in a garden.

Gaston Bachelard, that philosopher of science and poet of the elements, observes that the soul “possesses an inner light, the light that an inner vision knows and expresses in the world of brilliant colors, in the world of sunlight.” In the inner visions of The Red Book, color mainly appears as given, prior to conceptual organization by means of schema or code. Color colors—gives life and substance, materiality and sensual form—to the complexly crafted exposition of Jung’s fantasies, and the concrete and symbolic resonances of these colors give chromatic body to Jung’s evolving experience of self.

Read RED: amplification of a color in its entirety here. 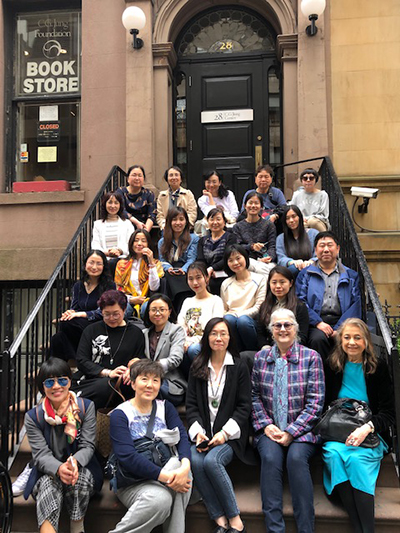