ARAS has set its vision on growing in two areas simultaneously. We are growing the archive itself with new images, new commentaries and expanded sections from less well developed parts of the archive such as the Meso American and Asian sections. And we are growing our outreach to the world with new programs such as the Pioneer Teen Program and the ARAS/ARTstor project. At any given time, we are developing projects that are more introverted and others that are more extroverted. The newest of our more introverted projects has just come to fruition through the generosity of a grant from the Bay and Paul Foundations.  When we put together The Book of Symbols, there were over 300 hundred wonderful images that had been selected for the project that did not make the final cut to be included in the book. This did not mean they were not as good as those that ended up in the book; we just couldn’t include everything we wanted to. Those images which were not included have now just been been published as part of the archive. Subscribers to the archive can access all the new images by typing “Bay and Paul Preservation Project" into the search box and clicking on Search Image Archive.

Adding these images sounds like a straightforward project but when you think about all the pieces that go into creating such a collection, you can get a good idea of the kind of work it takes to curate the ARAS archive which stands out as a unique selection of symbolic imagery and commentary. Grant writing, image selection, categorizing and filing electronically, writing commentaries, placing the images on the website—all are fine skills that our ARAS staff routinely exercise. The following staff members deserve our deep gratitude for their incredible skill, creativity, curiosity and dedication:  Karen Arm, Anne Thulin, Allison Tuzo, Kako Ueda and our Executive Director, Ami Ronnberg.

Our work at ARAS continues to be exciting and challenging.  We are developing wonderful new ventures, especially in Taiwan and China.  As we move into 2016, we have ambitious goals for the future. To realize those goals, we need help in the form of contributions from all those who believe in ARAS’ mission to bring a psycho-spiritual intelligence to the exploration of symbolic imagery cross-culturally. Click here to give what you can. 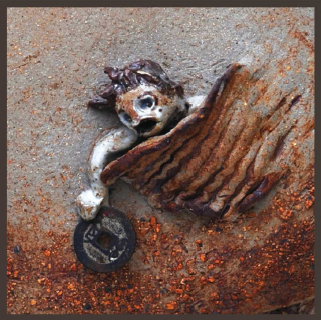 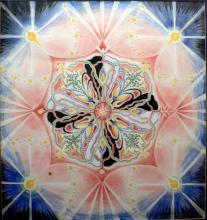 Martha Oliver-Smith presented the following piece based on her book Martha's Mandala at the 2015 Friends of ARAS Event in New York this fall. A review of the book was published in the last issue of ARAS Connections. Enjoy!

I would like to begin by explaining a few things about how Martha’s Mandala came to be a book. The text seen on this mandala comes from an essay called “Time,” written by my grandmother. Both her words and the image of the mandala itself, whirling on in its endless circle, seem to be telling the story.  Her words and the image itself.

It is the story of Martha Stringham Bacon, my grandmother, who was an artist, though she was reluctant to call herself that. She was never formally trained though she took art classes after high school and in her early married life. Her work was highly illustrative and influenced by other illustrators such as N.C. Wyeth, Arthur Rackham and Kai Neilson. She was a fine draftsman with a gorgeous sense of color. Perhaps due to her lack of formal education, she was extremely self-deprecating about her work and for the most part kept it to herself and her family.

I spent much of my childhood living in her house and growing up in her care. Over the years, she told me much of the story, her ideas, dreams and visions. She showed me her paintings and drawings; she also read to me and taught me to read. From there I was launched into the world of fairy tales, mythology, and poetry, onward to reading and studying novels and other literary forms, and thus to a long and rewarding career teaching English to high school and college students. Ultimately, because of my grandmother’s influence, I would eventually find my own rather tortuous way to my own writing.

As a child, I was unaware of how unusual my grandmother’s story was. Much later, when I was in my forties, I came across a letter when I was visiting my Aunt Alice, the youngest Bacon daughter.  I found it in a paper box moldering in a damp storage shed in Princeton, New Jersey.  Left in that shed for almost thirty years, Aunt Alice had finally allowed me to wade through the sea of archival materials after many years of me gently but persistently trying to persuade her to let me look through the papers and drawings.  The letter, floating loose among the old envelopes and scraps of drawings was from Carl Jung.

Read this piece in its entirety.

In this final Poetry Portal for the year we offer you an image of “Wings” as inspiration.  It was painted in the early 18th century by the French painter Nicolas Vleughels.  Wings evoke flight, angels and birds.  Soul and Psyche have wings.  Plato declared that “The function of the wing is to take what is heavy and raise it up into the region above where the gods dwell.”  With wings we can look at things from both the perspective of heaven and earth at the same time.  We hope that this image will inspire you to write a poem in our Ekphrasis tradition.  Please send your poems to info@aras.org by February 15, 2106

A heartfelt thank you to everyone who submitted a poem for the last “Invite to Write” inspired by the image of the “Veil,” which you can read here.  It is always a delight and deeply moving to read your submissions.