Perhaps like many of you, I have found myself watching a fair amount of television during the pandemic.  I recently finished all four mediocre seasons of a space odyssey saga entitled Expanse that takes place a few hundred years in the future. I was “spaced out” by the fourth season when the giant space ship, the Behemoth (named for Meliville’s Moby Dick or for the Polish extreme metal band from Gdańsk?), journeys into a weird energy field and suddenly decelerates rapidly causing the occupants floating inside to be slammed to the floor or into their chairs by the precipitous increase in gravity.

It occurred to me that the Behemoth’s slamming to a halt in its space travel with such dramatic impact on its passengers is not unlike our spaceship earth’s rapid deceleration which has been an unexpected godsend to some of us and a huge loss to many more in terms of life, health, and security.  The pandemic has given pause to reflect on the state of our planet and hopefully given enough of us a glimpse of a slower paced, less consumptive life in which we can even occasionally hear the voices of nature.  Our two contributors to this edition of ARAS Connections both know a tremendous amount about the stirrings in depth that this sudden deceleration has brought to us.  Paul Brutsche, one of the foremost Jungian scholars of symbolic imagery, has contributed an extraordinary gift in the form of “A Meditation on Melencolia in a Time of Pandemic."  Melencolia certainly knows about the sluggish deceleration that goes along with its taking hold of the soul. And, as Brutsche brilliantly suggests, Dürer’s etching from 500 years ago seems as relevant today as it was when Dürer first created it. There is something timeless and truly archetypal about the melancholic state of crippling stagnation, dread and despair that has been upon us.  Brutsche also points to the other side of melancholia in Dürer’s etching in which we get a glimpse of renewed creativity and expanded horizons. As Mary Wells Barron says, "The depth, beauty, erudition and soul of Paul Brutsche's discussion of Albrecht Durer's MELENCOLIA are moving in a way that is only possible through the true conjunction of word and image.”

Jeffrey Kiehl picks up the thread of dire threat and the need for renewal in his consideration of the environmental crisis of climate change.  As a former climate change scientist and now Jungian analyst, Kiehl is uniquely qualified to probe both the science and the psyche of our current crisis.  He originally presented this paper at the 2019 Art and Psyche Conference in Santa Barbara, California. We are lucky to share with you his presentation and its accompanying imagery of the mandala which occurs spontaneously throughout nature  as well as in the human psyche when it is most in need of compensation and healing.

Dr. Kiehl’s illustrations of his paper are exceptional and his final video of the mandala at play in natural and human creativity is among the most beautiful displays of  mandala imagery  I have ever seen. 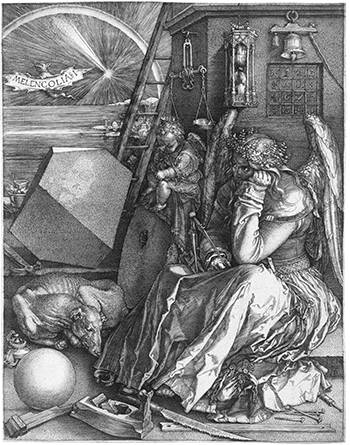 Although this engraving by Albrecht Dürer is 500 years old (1514), it can reflect something that is also experienced in the current corona virus crisis. One could say that the Covid-19 disease forces us to a collective experience of melancholy. The psychological situation into which this has brought us, the challenges and practical measures that became necessary to cope with them collectively and individually, as well as their possible historical significance, seem to me to be expressed symbolically in this engraving.

A superficial certainty has been lost. Suddenly, insecurity and doubt have taken the place of previous security and confidence. The clarity of our familiar outward circumstances has given way to a complex reality of questions, doubts and longings. The world is no longer as tightly knit as it used to be. It is called into question. Suddenly, unpleasant questions arise about meaning, questions about what is important in life, what is ultimately important. When life is threatened and one is not quite sure whether one is caught up by the deadly virus or is spared, inner, existential questions open up. The world presents itself as a jumbled multitude of isolated things.  Suddenly any big picture is missing. That is why it is so strangely difficult to really concentrate in such a time.

Read A Meditation on Albrecht Dürer’s Melencolia in a Time of Pandemic by Paul Brutsche in its entirety here. 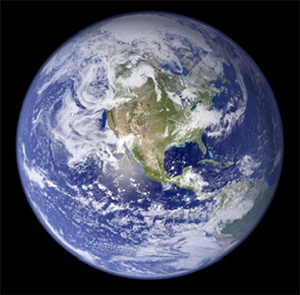 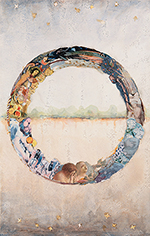 ARAS and the Art and Psyche Working Group, in collaboration, have developed a new project, "Art in a Time of Global Crisis: Interconnection and Companionship," as an international outreach through art. Our goal is to create a network of mutual support through art during this difficult time.

Colleagues and friends from around the world, representing various cultures, geographical locations and life-styles, have been invited to contribute artistic images with commentaries that represent companionship, resilience and hope in the face of threat, fear and struggle.

Please join us for our daily image postings here. You can even sign up to have these images sent directly to your inbox.